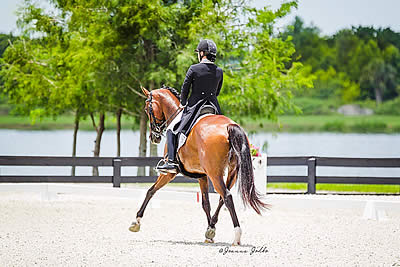 Wellington, FL (July 14, 2018) – A sweltering Florida summer couldn’t stop Excel Dressage’s Amy Speck-Kern and her KWPN mare Zenanta from attaining another milestone in their dressage career. During June’s Gold Coast Summer Solstice, held at the Palm Beach Equine Sports Complex in Wellington, Florida, Speck-Kern and the elegant bay mare topped their debut FEI Freestyle class with a 72.230%. Zenanta (Krack C x Ferro) made her Intermediaire I debut only in beginning of 2018, and her debut Intermediaire I freestyle victory demonstrates the alacrity with which she is successfully progressing up the levels. The pair danced to a selection of violin covers of pop music from Avicii, Kygo, Lindsay Sterling, Justin Bieber, and Selena Gomez, all choreographed to the movements of the Intermediaire I. Winning their first freestyle is a meaningful step as the mare continues to make progress towards the Grand Prix, and Speck-Kern also has her sights set on possibly taking Zenanta to regionals to do the Prix St. Georges, Intermediaire I, and Intermediaire I Freestyle.

The pair’s freestyle was designed by Karen Robinson of Applause Dressage. Beginning with a tribute to the late Avicii in the opening canter song, Gonna Love Ya, the test progressed to a Martin Z cover of Feel It Still by Portugal. The Man for Zenanta’s trot, a Lindsay Sterling cover of It Ain’t Me by Selena Gomez and Kygo for her canter, and Love Yourself by Justin Bieber for her walk. “I chose music that was easy to ride to and upbeat to match her elevated gaits,” said Speck-Kern, who trains out of her Loxahatchee facility with Olympian Ali Brock. “We decided to do the Freestyle as a step towards the winter CDIs next season; I’ve never done a CDI and wanted to practice with her in the summer when there was less pressure. She’s really been stepping up in her training, and our lessons with Ali [Brock] have been going really well. We are preparing her for the Grand Prix, but are very much taking our time and letting Zenanta determine when we are ready. There’s no rush, and the emphasis will be on quality. For now my plans are to show our I1 freestyle one more time this summer, then maybe go to regionals with an eye on nationals before seeing where our training is for the beginning of the 2019 season.”

Speck-Kern closed out her 2018 winter season with successful rides on her two campaign horses, Zenanta and Amadeus (Flemmingh x Welt Hit II). A and Z, as they are known around the barn, put in solid tests at the national level during the 2018 Adequan Global Dressage Festival. Zenanta began by making her Intermediaire I debut just before the start of season and closing AGDF Week 12 with a personal high score at the level; she and Speck-Kern also won the Intermediaire I during the Palm Beach Dressage Derby with a score of 66%. Amadeus, a gelding Speck-Kern scouted and imported from Europe as a 3-year-old, is making currently competing at Intermediaire and making steady progress towards the Grand Prix.