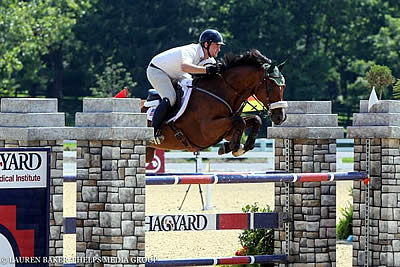 Lexington, KY – Aug. 5, 2016 – Before heading to work at CMW Architects in downtown Lexington, Douglas Masters hopped on Chris Richard’s Uno Z to ride to the win in the High Amateur-Owner Jumpers on Friday. In the High Junior Jumper division, which ran simultaneously, it was Emma Wujek and her own Ugaf who rode to victory.

In the speed class, Masters and Uno Z delivered one of only three clear rounds, stopping the clock in just 57.945 seconds to claim the top spot.

“I got Uno Z last year, and we’ve been working our way up,” Masters explained. “He is a very unorthodox horse. He goes in his way, and I put my own style into him. When I first saw him in Holland, I originally was not interested in him at all. After we jumped some really big jumps, I just had a huge smile on my face; it couldn’t be any better. He’s just a very talented horse, and it’s a privilege for me to be able to ride him.”

Masters said that balancing his professional career and amateur status as a rider has presented many challenges, but he is finally hitting his stride and finding a balance between both of his passions.

“I literally came right from work and walked the course and jumped around,” Masters said. “The schedule is crazy, but this isn’t anything new for me. I just moved him down here from my mom’s barn in Ohio, so I’ve finally been able to ride every day. We’re starting to get in our groove, and it’s a blessing that I have a job that will support me.”

Coming in second to Masters was Anne Gardner and her own After Eight, who clocked in a time of 61.493 seconds. The third and final clear came from David Oberkircher and Southfields Farm LLC’s Castelino Van De Helle, whose time of 67.28 seconds would earn them third place.

On the High Junior Jumper card, which also saw three clear efforts, Wujek and Ugaf’s clear round of 59.017 seconds proved to be unbeatable by the other challengers.

“My plan worked out today,” Wujek said. “I left out strides because Ugaf has the biggest stride in the world, and I also turned inside the timers to save time. It’s nice because he’s so balanced, I can really get up through those turns. It was amazing to win this class today; it’s a good feeling.”

Wujek, who trains with Tim and Kelly Goguen, said she purchased the stallion as her first Junior Jumper halfway through the Winter Equestrian Festival in 2015.

“Ugaf is awesome,” Wujek said. “He was my first Junior Jumper, and he is the best horse to learn on. He puts up with me so well. He takes a lot of leg, but you have to let him flow. He thrives with a challenge.”

Boggs Hill Farm is based just around the corner, giving Wujek the opportunity to enjoy Kentucky year-round, and she loves showing at the Kentucky Horse Show.

“I love the show grounds,” Wujek said. “The upkeep is awesome, and it’s really nice having a farm just down the road.”

Finishing in second place on the junior card was Claire McKean, who piloted Eregast Van’t Kiezelhof across the finish line in 62.64 seconds. Third place went home with Mary Elizabeth Cordia, who clocked a time of 65.338 seconds in the irons on Chelsie.

The 1.40m Open Jumpers kicked off Friday’s action in the Rolex Arena, and it was Sydney Shulman and the BCF Group’s Wamira who rode away with the blue ribbon. Finishing in second was Victor Amaya and Kristin Hull’s Arko, while third went to Alejandro Karolyi and Karolyi Showjumping Inc.’s Isibelle.

Junior rider Emma Kurtz of Hudson, Ohio won both the jumper phase and the hunter phase of the Washington International Horse Show (WIHS) Equitation on Friday of the Kentucky Summer Classic Horse Show. She rode Dr. Betsee Parker’s gelding Patrick to the double win in the equitation division.

Kurtz first rode the chestnut gelding at the Maclay Finals last November and competed with him a handful of times at the Winter Equestrian Festival in Wellington, Florida, so she explained that she was still getting acclimated to his ride.

The pair had placed second in the WIHS hunter phase last week at the Kentucky Summer Horse Show, and they returned this week focused on winning the blue.

“The jumper phase this morning was so fun!” Kurtz said. “I was really nervous going in because I could only watch two riders go through it.

“Patrick’s rhythm is different than other horses I typically ride, so it has taken a while for me to get used to it,” Kurtz continued. “I feel like I haven’t been really great on Patrick because he is a very different ride for me, but he is amazing! His stride is huge.”

The talented duo won the jumper phase with an impressive score of 94, which was five points ahead of the second place finisher, Casco M and Victoria Press’s score of 89.

“The only problem I usually have in the jumper phase is the time allowed,” Kurtz explained. “I always need to stay on my pace because I like to go slow.”

The jumper phase finished in the morning so the riders had the entire day to prepare for the WIHS hunter phase, which took place in the Alltech Arena.

“It was surprising that we had to ride in the indoor ring because we are not used to competing indoors quite yet in the season,” Kurtz said. “Patrick was holding back a bit, but he was perfect. He never does anything wrong. I could just tell a little difference in the way he went versus riding outside.

“It was great practice for us, especially since Maclay Finals happens there,” she continued. “We should all be ready!”

The hunter phase consisted of nine jumps with bending lines and a combination. Kurtz bested a field of 30 equitation riders to earn a score of 89. The top three finishers were within a point of each other with Madison Sellman and Alvarez L placing second in the hunter phase with a score of 88, and Samantha Cohen and Trump coming in third with an 87.

“My ride went well,” Kurtz said. “Patrick is so easy and sweet. Usually they have straight lines in the hunter phase, but today they made it a bit more exciting. It was fun to ride.”

Kurtz has been focusing on improving her equitation in order to stand out in a group of talented young riders. She rides often without stirrups and she laughed, “It’s not necessarily fun, but we have to do it!”

“I’ve been working a lot on my leg position because it sometimes slides back when I am in the air. Then sometimes it slides too far forward when I ride around so I’ve been focusing on keeping it more underneath me and keeping my legs where they should be.”

She plans on continuing to get to know Patrick through the summer by competing in the equitation divisions at the Blue Grass Festival Horse Show later in August before heading off to the Hampton Classic.

“He’s so sweet around the barn!” Kurtz said. “Today after our ride he got his favorite snack, a banana, as a treat!”