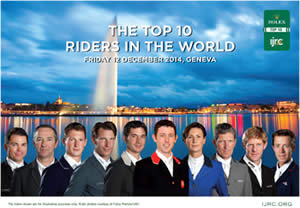 Geneva, Switzerland, 27 November 2014 – Excellence is not a singular act but a habit. The Rolex International Jumping Riders Club (IJRC) Top 10 Final, which is returning to its spiritual home, Geneva, this year, is probably the most competitive Show Jumping class in the world with just the Top 10 riders in the global rankings invited to go head-to-head. Only a brilliant sportsman or sportswoman, capable of performing at his or her very best on every occasion, can win this elite class, which demands exceptional skill, timing and courage.

The Rolex IJRC Top 10 Final takes place on Friday 12 December during CHI Geneva (11-14 December). The IJRC was founded in 1977 by a small group of the most eminent riders the sport of Show Jumping has ever seen, including the great champions Paul Schockemöhle, David Broome, Raimondo D’Inzeo and Nelson Pessoa. It is open to all riders who have taken part in Olympic, World or Continental Championships, those who have competed in at least five Nations Cups and to those ranked in the Top 300 in the world.

Rolex and the IJRC Top 10 Final

Rolex has been a loyal supporter of the International Jumping Riders Club Top 10 Final since it started in 2001. The class is an opportunity for the Top 10 riders and horses in the world to battle it out for end-of-year supremacy and to be recognised as – and rewarded for – being the best.

Geneva has always been regarded as the home of the Rolex IJRC Top 10 Final, but after the show hosted the first seven runnings of The Final, it moved to other significant venues before returning to Geneva in 2014.

Alban Poudret, Sports Director of CHI Geneva, said: “Rolex has a strong hereditary connection with Geneva, so it seems fitting that the Rolex IJRC Top 10 Final should be based here for the next few years. Over 200 journalists from radio, TV and news publications are on site during CHI Geneva – it is a great platform for international exposure for the event and the riders taking part.”

The riders will put a years’ worth of endurance and mental strength at the forefront of their minds during the competition, whilst navigating a challenging course designed by Gerard Lachat and Luc Musette.

Rolex’s Show Jumping Testimonees, the small band of top riders who have proved themselves to be exceptionally skilled horsemen and ambassadors for equestrian sport, have an impressive record in the Rolex IJRC Top 10 Final.

Rodrigo Pessoa, the Brazilian Olympic Gold Medallist, won the final in 2003 and 2005, while Meredith Michaels-Beerbaum, the first woman to be ranked Number One in the world, took it in 2004 and 2006 and Steve Guerdat triumphed for Switzerland in 2010. For the past two years the class has gone to German riders – Christian Ahlmann, winner of the Rolex Grand Prix in Aachen, in 2012, and Daniel Deusser in 2013.

Rodrigo Pessoa commented: “It is an absolute privilege to compete in the Rolex IJRC Top 10 Final. To be victorious here after a long year of competition is a rare achievement that is attained by only the most worthy and legendary champions of our sport.”

For further details on Rolex and its equestrian sponsorships, please visit http://equestrianismpressroom.rolex.com/en/2014.