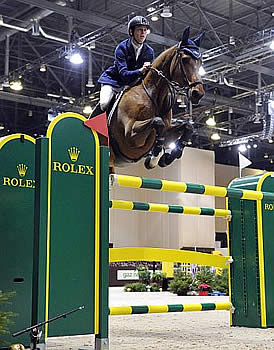 Geneva, Switzerland, 14 December 2014 – In sport, legends are created by repeated success at the very highest level. The remarkable Scott Brash today proved why he is the very best that equestrian sport has seen in a long time, when he won the third equestrian Major of the year, the Rolex Grand Prix at CHI Geneva. Brash adds this title to his Rolex Top 10 Final victory, which he claimed less than 48 hours earlier.

Riding the majestic Hello Sanctos, on whom he has enjoyed huge success in 2014, Brash was one of 12 riders who went through to the jump-off from the original 40 on the start list.

The first four into the ring all produced a clear second round, and it quickly became obvious that it was going to take a very special performance to take the Rolex Grand Prix title. But, as he has proved all year, Brash thrives on tough challenges.

He was the sixth rider to enter the huge arena at the Palexpo and, when he left it, he had yet again produced a fast, clear round that was to become the benchmark for the remaining six riders to attempt to better. Dismounted and pacing the warm-up ring in the company of Hello Santos’ owners, Brash had to go through the nerve wracking experience of watching his fellow riders try and better his jump-off time of 35.69 seconds.

Brash’s time remained relatively safe until France’s Roger Yves Bost entered the arena, clearly with every intent to put everything on the line to challenge for the title. The crowd was hushed but the atmosphere crackled, as Qoud’Coeur de la Loge seemed to fly around the course. But their final time, 35.94 seconds, was still not quick enough, and when the final rider brought one pole down, the Rolex title belonged to Brash.

Speaking about the Rolex Grand Slam of Show Jumping, Scott Brash said, “I think you have to make it your aim once you win one leg, because what Rolex has done in putting sponsorship up for these shows is just incredible and it’s kept our sport at a high, high level and raised our sport even more. So I think with that goal in mind, anyone who wins one leg will be targeting the next leg.”

Winning a Major defines a sportsman’s career, and the Rolex Grand Prix, the third stage of the Rolex Grand Slam of Show Jumping, is one of the most difficult titles to claim. Brash now becomes the live contender and travels to Aachen in May 2015 to attempt to win his second title in the cycle, and claim the €1m bonus on offer to any rider who can win the Grand Prix at CHIO Aachen, Spruce Meadows ‘Masters’ and CHI Geneva.

CHI Geneva is renowned within the equestrian community for its giant arena, which is at least twice the size of any other indoor venue, and the popularity of the show has never been higher, with the huge grandstands completely sold-out for the Rolex Grand Prix. Forty of the world’s greatest riders travelled to Geneva to challenge for the title, including Rolex Testimonees Kent Farrington, Meredith Michaels-Beerbaum, Kevin Staut, and last year’s winner, Steve Guerdat but, in the end, they were left to dream at what might have been as Brash dominated once again.

Alban Poudret, the Sport Director at CHI Geneva, said, “It is a great gift, when the public is here and when the public love it; that really is the best gift for all our efforts. Yesterday evening for the first indoor cross-country the public was incredible and during the Rolex Top 10 Final, and Rolex Grand Prix we thought that we were at a Championship. At CHI Geneva, we are emotional and passionate, and we do it with our heart for the passion of the sport, and for the friendship between all of us and we share this friendship with the riders.

“It is important to have a colourful show with different type of competitions, not something with too much format. There are too many shows that are the same and here we are happy when we see riders that understand that all the 700 volunteers pay such attention to detail to make such a great sporting feast.”

The Rolex Grand Slam of Show Jumping now takes a break until May 2015, when the Rolex Grand Prix will be staged during the weekend of 30-31 May at Aachen.

To celebrate the Rolex Grand Slam of Show Jumping, Rolex has created a number of films featuring its equestrian Testimonees. To view these films, please click here.