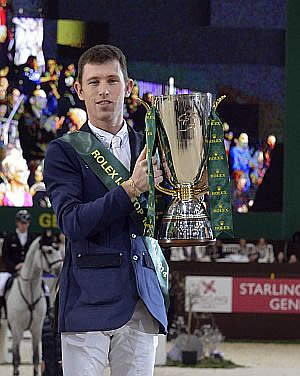 Geneva, Switzerland, 12 December 2014 – It is an elite competition for the best of the best and an opportunity for the Top 10 riders and horses in the world to compete for end-of-year supremacy. And after two rounds of intense competition, it was the rider who has dominated the World Rankings throughout 2014, Great Britain’s Scott Brash, who produced two flawless displays of Show Jumping to win the Rolex IJRC Top 10 Final, stamp his dominance on the sport, and stake a claim to being the rider of the year.

Riding his great gelding Hello Sanctos, Brash was one of four riders who went into the second round faultless. As the round progressed, the poles dropped, and Brash was the only double clear as the final rider, Penelope Leprevost, riding Flora de Mariposa, came into the ring. The only female rider to be competing in the Rolex Top 10 Final, the noise from the crowd hushed to a respectful silence, as they willed the Frenchwoman to another clear round.

But top level Show Jumping can be a tough sport, and after trying to cut time off the tightest turn on the course, Leprevost brought down the wall, resulting in four faults. The combination then knocked down a further two poles dropping them from first to last place.

Scott Brash said, “I must say my horse jumped wonderful today; he jumped really, really good and to be standing here, the winner of the Top 10 – it’s a class I’ve always only ever dreamed of winning, as a kid growing up. I always thought it was impossible to be in there, but to come here, in Geneva of all places, and win – it’s wonderful and I’m delighted.”

In a further twist of fate following a similar result during the World Equestrian Games earlier in the year, a single time fault in the first round for the French rider Patrice Delaveau, meant his clear in the second round resulted in being the runner-up once again by less than two seconds. Rolex Testimonee Steve Guerdat’s horse Albfuehren’s Paille lost a shoe just before entering the ring before the second round and after a quick visit to the farrier, Guerdat was able to finish with just four faults, and claim his spot on the podium in third place.

Speaking about his second place, Delaveau said, “Yes, it was the same fault for me [as at the World Equestrian Games] so for the future I will focus my training on this type of fault. It was difficult for me tonight with the speed. Scott was very quick, but for me it’s OK; I was very happy.”

Similar to the ATP World Finals in tennis, which is also supported by Rolex, the Rolex IJRC Top 10 Final is the only competition that is run by the competitors through the International Jumping Riders Club and, due to its very nature, is one of the toughest in the world to win. Staged during CHI Geneva for the tenth time since the competition started in 2001, at the riders’ request, the competition will now stay at the venue for the next few years.

The results of the 14th Rolex IJRC Top 10 Final: