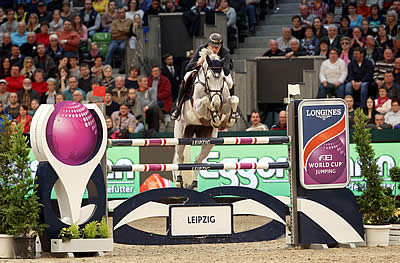 Leipzig (GER), 22 January 2017 – Belgium’s Gregory Wathelet revealed a new star in his string when galloping to victory with the fabulous grey mare, Coree, at the tenth leg of the Longines FEI World Cup™ Jumping 2016/2017 Western European League at Leipzig in Germany.

Chasing a super-fast time set by Frenchman Kevin Staut and his Olympic team gold medal winning ride Reveur de Hurtebise HDC, Wathelet broke the beam 0.17 seconds quicker to claim maximum points and move up to tenth place on the qualification table. However, Staut remains the undisputed league leader with a massive 78 points to his credit following a spectacularly consistent season, and looks a serious contender for the 2017 Longines Final in Omaha, Nebraska (USA) in March.

There was a lot of exciting young German talent on show, and seven home runners went into the timed round in which 21-year-old Guido Klatte set the pace with a great clear from Qinghai in 44.90 seconds. Compatriot Markus Brinkmann bettered that when posting 44.47 seconds with Pikeur Dylon but then last year’s surprise winners at this fixture, 23-year-old Niklas Krieg and Carella who eventually finished third, went flying through the finish in 43.76 seconds to go well out in front.

Roger Yves Bost and Sydney Une Prince, winners at the previous leg in Mechelen, Belgium, set the crowd alight when finding a new route to the final oxer through a flower display, but a pole down left this French pair out of contention. So it was Staut’s brilliant run in 41.94 seconds that Wathelet was chasing when third-last to go.

“Coree is an amazing horse, but she’s really only at the beginning of her career,” said the man who claimed individual silver at the FEI European Championships 2015 in Aachen (GER) and who wasn’t expecting too much of the 11-year-old daughter of the great Cornet Obolensky.

“Sometimes I lose her a little bit when I go fast, but today I had a good feeling because there were a lot of turns and everything came up just right for us! I didn’t see Kevin go, but he’s always fast so I knew I had to take a lot of risk. I’m very lucky to have this mare. I got her three years ago and she was initially for sale but then Judith Goelkel, who has eight horses with me, bought her and we have taken time to bring her along. I was planning to give her a rest, but now we will see if we can go to the Final – that is my first goal for 2017!” Wathelet said.

Gregory Wathelet BEL (1st): “Since the middle of last year Coree has been improving steadily. She did her first Grand Prix in July and she’s been improving ever since. She’s always been good except at Geneva where we had a bit of a misunderstanding. I’m really delighted with her!”

John Roche, FEI Jumping Director: “Congratulations to the Organising Committee here in Leipzig for the 20th anniversary show under the directorship of Volker Wulff. I’d also like to congratulate horse-owner Judith Goelkel on the outstanding performance of her lovely mare, Coree.”