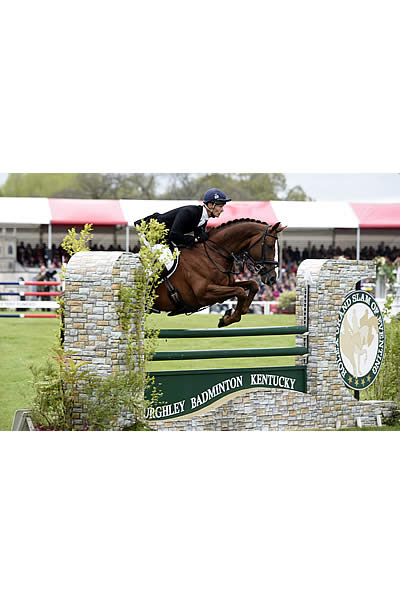 It was 11 years since Fox-Pitt last won Badminton back in 2004 and he was not going to squander the chance to claim his second victory despite the strong opposition from the high-class field of international riders, with Germany and New Zealand taking four of the other top five final places.

Andrew Nicholson (NZL) had led from Day One and he was focused on claiming his first ever Badminton title after 31 years of trying. With the cross-country phase not causing too many challenges for the top-placed riders after dressage, the Kelvin Bywater designed show jumping course was to change everything on the leaderboard. The packed grandstands around the main arena saw only five clear rounds before the final top 10 placed riders jumped, and even two of those clears incurred a penalty time fault. It could not have been more tense going into the final five riders, with just three penalties covering them, the cost of one pole down.

Lying in fourth position overnight, Ingrid Klimke came agonisingly close in the end to becoming the first ever German rider to claim the title for a second time, having previously also finished in second place back in 2006. Klimke delivered a perfect clear round to ultimately move her up two places to finish second. Next to go was Great Britain’s Oliver Townend riding Armada who were the 2014 runners-up. Sadly a disastrous round with four poles down took them out of the placings down to 11th position.

Both Fox-Pitt and Nicholson, knew they each had to jump a perfect clear to prevent Klimke from winning, but despite this added pressure, Fox-Pitt delivered a faultless performance to the delight of the home crowd who took to their feet to applaud their British hero. This set up an electric climax to the competition as Nicholson entered the arena on his edgy 15-year-old horse Nereo. The crowd collectively held its breath for Nicholson, but it was not to be as the pair crashed through the second fence to hand Fox-Pitt the Badminton title once more.

A delighted Fox-Pitt said, “It’s been a long time since I won with Tamarillo [in 2004], which makes you realise how hard it is and how everything has to go right. Chilli has had a fantastic week; he’s gone wonderfully well. It hasn’t been a very relaxing day today, but it was my lucky day and Chilli jumped brilliantly.”

Previous Badminton winner Jonathan Paget (NZL) finished in third place despite hitting one pole down, while eventing legend Sir Mark Todd produced a brilliant clear round of show jumping to move up from joint 15th after dressage to fourth overall; and he could have even claimed third place if not for one time fault in the final phase. Rolex Testimonee Pippa Funnell, riding Redesigned, finished in 12th position overall having climbed from 17th place after a superb ride in both the cross-country and show jumping phases.

Kentucky, and Badminton – the British horse trials on which the modern sport of eventing was founded – run two weeks apart in the spring, and Burghley, in the east of England, is the autumn highlight of the global sport. All three have stunning settings and attract vast crowds over the four days of competition.