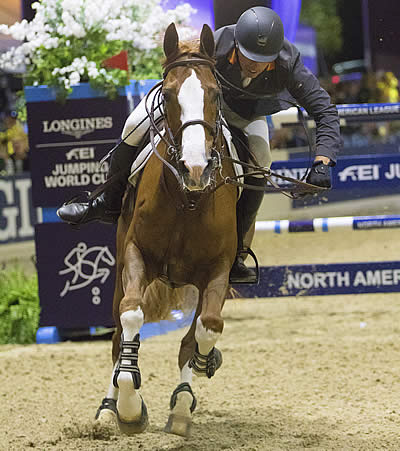 Less than three hours from the city of Columbus, which hosted its first ever Longines FEI Jumping World Cup™ qualifier this weekend, is German rider Wilhelm Genn’s Rheinland Farm. Genn wasn’t there but found himself on top in the World Cup competition, more than 2,400 miles away.

Genn (GER) and his mount Bugatti topped a nine-horse jump-off to win the $100,000 Longines FEI Jumping World Cup™ Sacramento, their first victory in a World Cup event. With a clear jump-off in 36.88 seconds, the duo topped Karrie Rufer (USA) and Georgie d’Auvray EC (37.31 seconds) by just under a half-second. Karl Cook (USA) and Caillou finished third, crossing the timers with a clean round in 38.47 seconds.

“I was hoping I got a chance to run for it today, and it worked out. Bugatti likes the footing, and he likes the crowd — it gets him a little excited, and that makes him better, because normally he’s a very lazy horse. It all kind of played a little bit in my favor.” — Wilhelm Genn (Germany)

The stands were packed to capacity Saturday night at the Murieta Equestrian Center as 25 combinations lined up to take on Olaf Petersen, Jr.’s (GER) 1.60m course. The first clear round did not come until the 14th horse in the order, but eight others quickly followed suit.

“My horse felt great,” Genn said. “I like to plan things, so before we came here, we showed in Kentucky, because they have a grand prix Friday night under the nights [indoors]. That was our warm-up, and we jumped very well there, so I felt pretty confident.”

Genn had not originally planned to compete on the west coast, but when his son Theo, who also jumped Saturday night with Taylor Reid’s Boucanier, elected to make the journey, he decided to join him. The decision proved to pay off in spades.

New names sit atop the standings in both the east and west coast sub leagues of the Longines FEI Jumping World Cup™ North American League. Genn, who is declared on the east coast, now leads those standings. He is tied at the top with Molly Ashe Cawley (USA), who earned her first Longines victory in New York. Both have 20 points.

Rufer may have finished second in Sacramento, but she also ended the night a winner, going to the top of the west coast standings with 21 points. She earned 17 points for her runner-up finish, combined with the four points she received in at Vancouver (CAN) in August, the first qualifier of the 2018-2019 season.