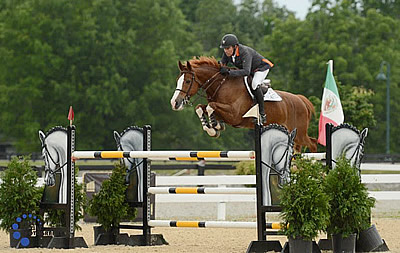 Lexington, Ky. – June 11, 2018 – The first week of the Country Heir I & II Horse Show at the Kentucky Horse Park showcased of some of the finest hunters and jumpers in North America.

$40,000 George Hennessy Grand Prix
An audience gathered to watch exciting show-jumping action in the Rolex Stadium Sunday. International course designer Steve Stephens and his team set the track for a lively afternoon of sport. Of the 30 entries, eight left all the rails in the cups and progressed to the jump-off round. Wilhelm Genn (GER) and Bugatti, owned by Eduardo Leon, were nearly two second faster than the second-place finishers, Liza Finsness and her own Shiver. Hector Florentino (DOM) and Heliante Ter Wilgen, owned by Marion S. Head, were just two-tenths of a second behind Finsness.

“There was only one big question for me on the course and that was the line to the triple combination,” Genn said. “When I walked it, I thought I would do six strides — it was a long five. I took a shorter approach to the oxer and it set me up to do the six to the triple and he listened beautifully. In the jump-off he was his usual self. He was really super.”

Bugatti, a 12-year-old KWPN gelding (Heartbreaker x Pilot), has been a successful partner for Genn for seven years. They have at least 10 grand prix wins to their credit and recently won two FEI grand prix events, one in Mexico City during the Longines Global Champions Tour and another at San Miguel de Allende, also in Mexico.

“He’s a big goofball,” said Genn about Bugatti’s personality. “He’s like a little kid. He’s basically lazy but he’s a curious horse. He’s sweet, but he can be a little bit of a bully.”

Genn was quick to compliment the show. “I’ve known Frankie (Stark) for years and I love Julie (Agar) in the office,” he said.  “It is a very nice show — very well-run.”

$30,000 International Hunter Derby
Havens Schatt piloted Mostly Sunny, owned by CH Farms LLC of Delano, Minnesota, over the Steve Stephens-designed course to the win of the $30,000 Hunter Derby. In an exciting match-up of 40 top-notch horses and riders, Emma Kurtz and Dedication, owned by Dr. Betsee Parker, led after the first round with a huge score of 186 points but were left out of contention in the second round.

Second-place finisher Kelley Farmer and Todd Minikus’ Exceptional were in fourth place after the initial round, with 178.5 points and added 185 points to their second round. Schatt and Mostly Sunny, a striking 10-year-old Zangersheide gelding, earned 364 evenly-split points to win the event just .5 points ahead of Farmer. Caitlyn Shiels and Cassius, owned by Durpetti Equestrian LLC, were in the eleventh spot after the first round. The pair stepped up with an outstanding second round to take the third-place prize.

Schatt imported Mostly Sunny from Europe when he was 5. A football fan, Schatt gave him his barn name, Larry, in honor of the legendary Arizona Cardinals receiver Larry Fitzgerald. As a 7-year-old, he was already competing in the High Performance Hunters and some derbies.

“He’s a very scopey and quiet horse,” Schatt said. “He was always a little inconsistent because he was still green. He had a couple of little injuries and he had to take time off. Now, he’s becoming the horse I always knew he could be.”

His owner, David Lubben (CH Farms), now rides with top hunter trainer Scott Stewart and offered Schatt the opportunity to continue to campaign him as a derby horse. She was thrilled to have him back. “He’s my favorite horse ever,” she said.

Schatt said that the first round rode very nicely but, for whatever reason, the handy round under the lights turned out to be challenging. After watching the first horse on the course, Schatt adjusted her plan. It worked out in their favor and earned them the victory gallop.

“Flowers for the champions, trees and shrubs everywhere, the VIP tent between the hunter rings — for a venue where show at a lot, they know how to make it a special horse show,” she said about the Country Heir I & II management.

Click here for complete results of Country Heir Week I.