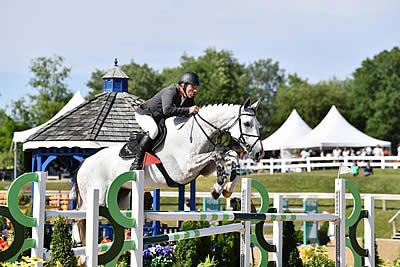 Traverse City, Mich. – July 12, 2019 – The second week of the 2019 Great Lakes Equestrian Festival (GLEF), presented by CaptiveOne Advisors, LLC, reached its pinnacle thus far Friday afternoon as 28 horse-and-athlete pairs took to the Grand Prix Ring for a shot at the winning title in the $30,000 Ingram Family Welcome Stake. Although they incurred a single time fault, Wilhelm Genn of Rheinland Farm in Warren, Ohio and Dirocco Blue ultimately took home the victory, the second big win for Genn so far this season in Traverse City.

The first of four Equitation Tuesdays during the Great Lakes Equestrian Festival took place during Week II, with junior athletes displaying their mastery of proper form over fences and on the flat in the hopes of claiming top placings and valuable qualifying points towards this year’s year-end finals. One of the first winners in the popular series, Ashley Scofield and Watermark, claimed the win in the hotly-contested ASPCA/NHSAA Maclay Horsemanship class.