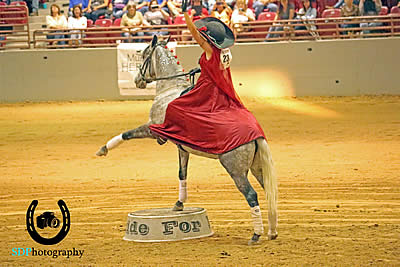 Jacksonville, FL (May 13, 2016) – This past weekend, the Jacksonville Equestrian Center was host to genuine American Mustangs and their trainers as they showcased their newfound partnerships to a packed house. The Extreme Mustang Makeover, which is designed to test both human and horse for their ability to learn quickly and make the most out of a small period of time, was presented by the Mustang Heritage Foundation. Each participating trainer had just 100 days to transform a wild mustang into a star performer that would impress the judges and the crowd. Spectators then had the opportunity to bid on a piece of America’s equine heritage at the end of the competition.

Youth competitors adopted their Mustang partners before the event, and showed off how far they had come together in 100 days. Adult competitors auctioned off their Mustangs at the end of the Extreme Mustang Makeover weekend. The competition included classes such as Handling and Conditioning, Trail, and Freestyle. Adult competitors all vied to be selected to compete in the Top Ten Freestyle Finals that took place directly before the Mustang auction. A first place prize of $25,000 and a custom-made Gist belt buckle was at stake for the winner. Alongside nine other spectacular performances, Marsha Hartford-Sapp and her Mustang partner Freedom brought the crowd to their feet with a bridleless riding exhibition and other impressive acts. Hartford-Sapp and Freedom were named winner of the Extreme Mustang Makeover.

Dan Russell, who was onsite representing the Bureau of Land Management (BLM), explained, “The Extreme Mustang Makeover events show people that Mustangs are good horses. Mustangs are the horses that the original cowboys rode in the 1800s. There are roughly 50,000 horses on the range right now and an almost equal amount being cared for in holding facilities. They’re taken off the range into holding facilities for different reasons – forest fires, droughts, over-grazed land – and we’re just looking for somebody to give them good homes.”

Taylor McIntosh, the 2014 Extreme Mustang Makeover champion from just outside of Auburn, Alabama, made it into the Top Ten Freestyle Finals with his assigned Mustang, Sonora, at the Jacksonville Equestrian Center’s competition. McIntosh shares in the Mustang Heritage Foundation’s admiration of the strength of Mustangs’ spirits. “At first I did this to gain exposure, but now that I’m doing this for my third year I can really say it’s all for the love of the Mustang,” McIntosh shared. “Sonora is a smart horse – and that can be both a good and a bad thing – but she’d tried so hard at everything I asked her to learn. I love that about her.” McIntosh and Sonora’s Freestyle performance included McIntosh standing in the saddle, and Sonora lying down.

The youth trainers at the Extreme Mustang Makeover were as excited about the Mustangs as the adults, and also delivered impressive performances. After Ruthann Strickland competed with her adopted Mustang, two-year-old Battle Beau, she explained, “I did this because I wanted a challenge. I’ve never trained a horse before. I really like him, but he can be a handful! I love his personality. He’s a goof and can be very sassy – we’re working on that,” she laughed.

For more information and to find out about other upcoming events, visit www.jaxequestriancenter.com or call Penny Gorton at (904) 255-4227.