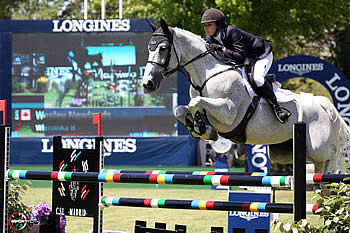 Madrid, Spain – Wesley Newlands of Toronto, ON concluded a successful week of competition at the Longines Global Champions Tour in Madrid, Spain by placing second in the €25,000 Caser Seguros Trophy on Sunday, May 22.

Held on the final day of the international show jumping competition, the €25,000 Caser Seguros Trophy acted as the grand finale of the CSI2* division, attracting 42 entries.  With her name at the top of the start list, Newlands was the first rider to tackle the track set by Guilherme Jorge of Brazil, who will also handle course designing duties at the upcoming 2016 Rio Olympics.  Riding Wieminka B, Newlands proved that it was possible to jump the course fault-free, posting a perfect score of zero.  Nine other entries would also jump clear, setting the stage for an exciting jump-off.

Maintaining the order from the first round, Newlands was once again the first rider on course for the jump-off.  Knowing she was setting the pace for those who followed, Newlands tightened up the turns and sliced the signature Cesar Seguros fence before crossing the timers in 37.09 seconds.  In the end, just one rider proved faster than Newlands: Emma Heise of the United States posted a time of 35.83 seconds riding Viper Vrombautshoeve Z.

“Unfortunately, I had to be the pathfinder, but my strategy was to go for a fast clear,” said Newlands of her jump-off plan with Wieminka B, a 13-year-old grey Dutch Warmblood mare (Cardento x Topas).  “My mom was at home in Toronto and set her alarm for 5 a.m. so she could watch me on-line; luckily it went well and was worth getting up for!”

In addition to placing second in the €25,000 Caser Seguros Trophy, Newlands and Wieminka B were also double clear to place fourth among a 66-horse starting field in Friday’s CSI2* 1.40m competition.

“I was very happy with ‘Minka’ this week in Madrid,” said Newlands, who was the lone Canadian competing in the CSI2* division.  “She jumped a lot of super rounds and seems to be in great form.  This was her third show since I’ve been in Europe.  She was also double clear and placed ninth in the Grand Prix in Antwerp, so it was a nice improvement to finish second.”

Newlands, who spent the winter season competing at the highly-competitive Winter Equestrian Festival in Wellington, FL, is now based full-time with 2014 World Cup Final Champion, Daniel Deusser of Germany.

“I am really enjoying training with Daniel full-time,” said Newlands, 28.  “He gives me a lot of confidence going into the ring.  He knows my horses really well, so he can help me focus on things with each horse to improve their success in the ring.  It’s also nice because he rides my horses sometimes, and I’m able to watch and learn from what he’s doing with them.”

Since returning to Europe in April, Newlands has competed at the Global Champions Tour in Antwerp, Belgium, where she and Wieminka B jumped double clear to place ninth in the €72,000 CSI2* 1.45m Grand Prix.  Her next competition stop was CSI3* Mannheim, Germany, before heading to Madrid.  In addition to Wieminka B, Newlands also competed in Madrid with Geisha van Orshof, a ten-year-old grey Belgian Warmblood mare (Cabrio van de Heffinck x Parco).

Next on Newlands’s competition calendar is the Global Champions Tour event at Chantilly, France from May 26 to 29, followed by the Longines Athina Onassis Horse Show in St. Tropez, France from June 2 to 4.