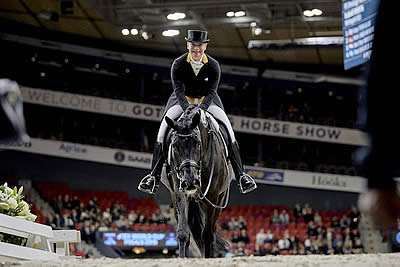 The legend that is Germany’s Isabell Werth (49) steered her wonderful 13-year-old mare, Weihegold OLD, to victory in the Grand Prix as the FEI Dressage World Cup™ Final 2019 got underway at the Scandinavium Arena in Gothenburg (SWE).

But the World No. 1 rider, and the most decorated athlete in the history of equestrian sport, is taking nothing for granted as she chases down her third consecutive, and fifth overall, World Cup title.

“I can feel the breeze on the back of my neck!” she admitted, after the World No. 2 combination of America’s Laura Graves (31) and Verdades slotted into second place on a day when US riders were highly impressive.

Indeed, the deciding Freestyle competition looks set to be another thriller, and the sold-out stadium will be throbbing with excitement. Third-placed Dane, Daniel Bachmann Andersen, said it suited his stallion Blue Hors Zack when the crowd clapped enthusiastically as they came into the ring. But Judy Reynolds’ Vancouver K didn’t feel the same way, spinning around with fright and boiling over at times when they were first to go. The Irishwoman, whose Freestyle programme is a big crowd favourite, just shrugged it off after finishing 14th of 18 starters. That blip is already confined to history as far as she is concerned.

It was America’s Kasey Perry-Glass and Goerklintgaards Dublet who headed the leaderboard with a score of 77.267 at the halfway stage after a performance that oozed partnership between horse and rider. And when Germany’s Helen Langehanenberg and Damsey posted 76.957 as the second-half action began, the US rider was still out in front. But then Werth set off with Weihegold and the big scores just kept coming in, the precision and quality of the mare’s work seeing them post 81.755 to soar out in front.

Bachmann Andersen’s Blue Hors Zack did a lovely test. “He’s just getting better and better!” said the Danish star who temporarily slotted into second when putting 78.152 on the board, but Werth’s lead looked very vulnerable when Graves followed him into the ring, fourth-last to go. Some big early scores suggested the American just might oust the defending double-champion, but there was a little mistake in extended trot and the final scoreline of 80.109 left Werth in pole position.

The German superstar and multiple champion knows the story is far from over, however, and Graves reminded her of that at the post-competition press conference. You could tell that the American meant it when she said, “I’m incredibly hungry to be at the top of the podium and I’ll do my very best tomorrow. I know there is a real chance; I believe in this horse – he’s 17 but in the best shape ever!”

But Werth has been to battle, and won, so many times before, and as she said, “Gothenburg holds great memories for me.” It was here that she posted her very first FEI Dressage World Cup Final win with Fabienne in 1992. Can she do it again 27 years later? As she said, “Tomorrow is a whole new game – we will have to wait and see.”