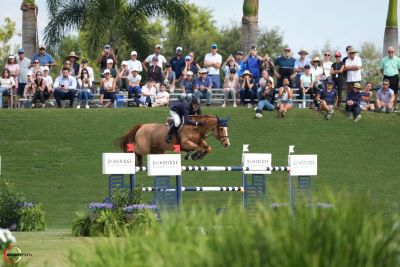 Wellington, FL – February 5, 2022 – A picturesque South Florida day set the stage for Saturday’s feature class at week 4 of the Winter Equestrian Festival, sponsored by The Bainbridge Companies. The $216,000 Bainbridge Companies Grand Prix CSI4* was the highlight on the Derby Field at Equestrian Village and ended with yet another victory for the home team as McLain Ward (USA) went two for two this week with his 2020 Tokyo Olympic Games mount, Contagious, owned by Beechwood Stables.

Anderson Lima (BRA) designed the course for the event, and the majority of the 46-horse starting field was unable to produce a fault-free effort. Lima’s last-line triple combination proved to be the Achilles heel for a large number of riders at the wide-oxer in fence, and the open water obstacle played a factor for several others. Two riders were kept from the jump-off after notching slightly over the 84-second time allowed while an additional nine fell victim to a single unforgiving rail. As the last horse cleared the final obstacle of round one, only four entries of the original field would return to contest the jump-off. It was a battle of the elite as Ward and 2020 Olympic individual gold medalist Ben Maher (GBR) contested Ali Wolff (USA) and Zoe Conter (BEL) in round two.

Ward was the first to return and immediately left no room for error as he and the 13-year-old Rheinlander gelding (Contagio x For Keeps) flew over the field in what proved to be the fastest time of 42.95 seconds. Maher followed Ward and put forth a solid effort but took down one heartbreaking rail to end as the only four-falter in the group. Young up-and-comer Conter piloted her long-term mount Davidoff De Lassus, a 13-year-old Belgian Sport Horse stallion by Ugano Sitte owned by Stephex Stables, through another clear round as did professional Wolff with tried-and-true partner Casall. The Olympic combination proved impossible to beat with the pedal to the floor from start to finish and scored the win with over two seconds of leeway between them and the next challenger.

The victory was extra special as Contagious’s owners, Lise and Annie Revers, were able to attend the event.

Twenty-one-year-old Zoe Conter found herself in a victory gallop for one of her biggest finishes to date as she slid in just behind Ward with a time of 44.92 seconds.

The podium was rounded out by Wolff and Blacklick Bend Farm’s 17-year-old Holsteiner gelding Casall (Casall x Capitol I) who have been successful partners for many years. As the final pair to return, they produced an efficient and clean performance with a landing time of 45.70 seconds.

Saturday morning began with 14 entries in the NHS/THIS Adult Medal which took place in the Equine Tack and Nutritionals Ring 6.

Of those horse and rider combinations, Gigi Manigault, of Charleston, SC, rode to victory aboard Wizzard of Odds after entering the flat work-off sitting in third place.

Wizzard of Odds is a nine-year-old KWPN gelding by Chacco Blue owned by Don Stewart that Manigault has been riding for about a year.