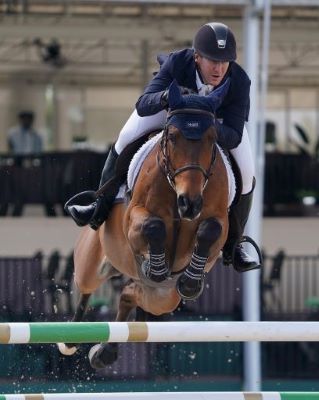 Wellington, FL – March 12, 2021 – McLain Ward (USA) and Catoki, owned by Marilla van Beuren, Bob Russell, and McLain Ward, flew to their second victory of the week in the $37,000 Bainbridge Companies 1.45m Classic CSI5* on Friday, March 12, in the International Arena at the Palm Beach International Equestrian Center (PBIEC) as competition continues as part of WEF 9, sponsored by Fidelity Investments®.

Topping a field of 53 in the starting order over a speed track set by Alan Wade (IRL), Ward and Catoki, a 12-year-old Holsteiner gelding by Catoki x Cartello B, left all the jumps up to fly across the finish line in 52.33 seconds, nearly three seconds faster than the runner-up.

“He’s been incredible here this year,” said Ward of his winning mount. “He felt great on Wednesday, so I knew he was in good form for today. He’s starting to know when the bell goes [what to do] a little bit in this ring, so it was a little bit out of control I thought. I was a little bit faster than I meant to be, but he’s such a careful horse, I got away with it.”

Vivian Golden and D’Artagnan Stay on Top to Win the $5,000 USHJA Pony Derby

Pony hunter riders had their chance to show off on the Derby Field at Equestrian Village on Friday in the $5,000 USHJA Pony Derby. After a classic round and handy round, Vivian Golden and Emma Dyson’s D’Artagnan finished at the top of the class with scores of 89 and 88 for a total high score of 177.

Fifty-seven riders competed over the first round track consisting of 10 fences designed by Tom Carlson. The class was set at three separate heights for 13 larges, 27 mediums, and 17 smalls. Once the classic round was complete, the top 12 combinations were called back to navigate the handy round.

Third in the order, Golden, of Reading, PA, and D’Artagnan took the lead with a score of 89 and held their top spot for the remainder of the classic round. This class was only Golden’s second time showing D’Artagnan.