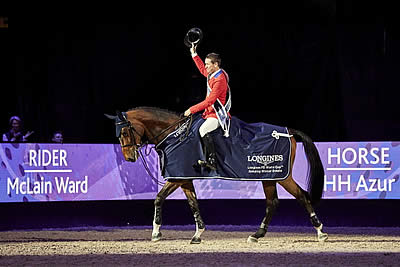 The speed with which the last remaining riders have signed up for the Longines FEI World Cup™ Jumping Final 2018, which kicks off in Paris (FRA) on 11 April, tells you everything you need to know. This is a trophy that every rider wants to win, and the prospect of placing your name on the Roll of Honour that includes so many of the legends of this sport is tantalising. When it happened at last for America’s double Olympic gold medallist McLain Ward (42) at the 2017 Final in Omaha (USA) 12 months ago, he couldn’t hold back his emotions. It had been such a long time coming, and the victory was very, very sweet.

“I’ve been doing this for 25 years or more, and I’ve come so close so many times and one way or another I’ve messed it up!” he said. He made no mistake this time around, however, flawless throughout the entire week with his brilliant mare who he described as “an independent woman”. They’ll be the ones to beat when the action gets underway at the AccorHotels Arena, but they’ll have to be at their very best once again to hold back the top-class opposition.

A total of 10 other US riders have also made the cut from the North American Eastern and Western Sub-Leagues including 2013 champion Beezie Madden (54), and Richard Spooner (47) who won the qualifier in Las Vegas in November, finishing the West Coast series at the top of the leaderboard. Kristen Vanderveen (28) described it as “surreal” when she booked her ticket to Paris with a win at the last leg of the season in Ocala (USA) last weekend.

It will all get very real when the opening speed class begins to throw some light on the destiny of the 2018 trophy in three weeks’ time.

Mexico’s Gustavo Ramos also qualified through the North America series while the countries of South America will be represented by Brazil’s Felipe Amaral who won the South America South series, and Colombia’s Carlos Lopez who qualified through the Western European League. Across the globe, it was local legend Lisa Williams (51) who topped the five-leg South Africa qualifying series. She won’t be bringing a horse to Paris, but she intends to be a spectator and tourist in the City of Lights.

Meanwhile, the Central European League came to a climax with the Final in Warsaw (POL) earlier this month where Estonia’s Urmas Raag (52) reigned supreme and fellow-countryman Rein Pill (57) also qualified for the Longines Final along with Latvia’s Kristaps Neretnieks (28).

The spread of countries at this year’s finale is particularly impressive, embracing all corners of the globe and offering a mouth-watering menu of possibilities. The flags of Australia, Belgium, Brazil, Colombia, Egypt, Estonia, France, Germany, Great Britain, Ireland, Italy, Jordan, Latvia, Mexico, Netherlands, Saudi Arabia, Spain, Sweden, Switzerland and USA will all by flying high, and as always, we can expect new faces, a few surprises and the most amazing sport.