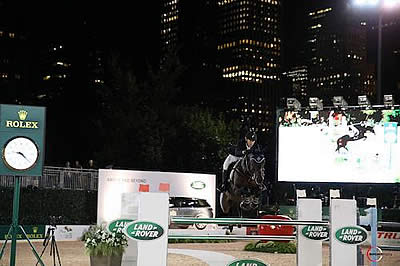 Thursday was deemed “Canadian Pacific Day”, as competition highlighted the $40,000 U.S. Open Canadian Pacific FEI Speed Class, which saw a win for McLain Ward (USA) aboard HH Carlos Z. The evening’s competition also featured the $50,000 Engel & Völkers Puissance, where Ward and Andrew Kocher (USA) tied for victory by clearing the impressive wall in four rounds, and jumping off at 6’9″ inches. The $25,000 U.S. Open Hollow Creek Farm Under 25 FEI Grand Prix was held on Thursday as well, with a win for Daniel Coyle (IRL) aboard Fortis Fortuna.

The course designer for international show jumping competition in Central Park is this year’s Rio Olympic Games designer Guilherme Jorge (BRA). In the $40,000 Canadian Pacific Speed class, which was held in a faults converted format, Jorge saw 34 horse and rider combinations that included some of the world’s very best.

Two-time Olympic Team Gold Medalist and Rio Olympic Team Silver Medalist McLain Ward was the winner in a blazing fast time of 58.63 seconds aboard the 14-year-old Zangersheide gelding HH Carlos Z (Chellano Z x Voltaire). Ward and ‘Carlos’ have won in some of the greatest destinations and biggest competitions in the world and led the victory gallop for the first time this year in the world-famous Central Park event.

Conor Swail (IRL) won the class in the first two years of RCPHS competition, but settled for second place this year, with a time of 60.26 seconds riding Ariel and Susan Grange’s Cita. Hardin Towell (USA) and Evergate Stables’ Lucifer V finished third in 60.45 seconds. Emanuel Andrade (VEN) and his own Hardrock Z placed fourth in 64.77 seconds.

Commenting on two victories in one night, Ward noted, “For me, it is a good comeback, because my record here is not so good. I think my best score is 16 and I think I have fallen off twice, so I was actually having a little nervous laugh about that on the way down to the ring tonight.

“Carlos is a great campaigner for me,” Ward stated. “He just does every job at the horse show – other than the Puissance. If he is in form, he really is tough to beat against the clock, and I was thrilled with the way he handled the evening. It is a unique atmosphere and some horses handle it better than others, so I was thrilled that he handled it well, and I think I have a nice set up for tomorrow night.”

Remarking on his second place finish, Swail detailed, “I think right from the start Hardin put up a very good time. It seemed that it was going to hold quite well throughout the class, but there are a lot of world-class competitors here this year. McLain went in, and he is a very fast rider and he has a very fast horse, so I think everything came off very well for him.

“It was a little bit the same for me,” Swail continued. “I was trying to etch out somewhere that I could maybe leave out a step that no one else did. Even my turn to the last fence, I thought I could try something a little different just to try and pip McLain, but I did not quite get it.”

“She is an extremely careful horse, and she has proven to be a very good jumper,” he praised. “I was very pleased with her tonight. She did everything I asked of her, and second place was a good result for us tonight.”

Though his time did not hold up for the win, Hardin Towell had a great experience with his mount Lucifer V and feels confident in his horse heading into Friday’s grand prix competition.

“The last place I showed was Spruce Meadows, and this is definitely a lot different jumping,” Towell noted.  “I knew it was going to be a fast class, and my plan was to be quick. I hoped to be top three, and I could not have done anything different at the end. Maybe I could have been a little smoother, but I know my horse, and I was happy with how he jumped.”

Ward and Kocher Attempt 6’9″ in the Puissance

The evening’s competition concluded with the $50,000 Engel & Völkers Puissance, which saw a tie for McLain Ward riding Evergate Stables’ ZZ Top VH Schaarbroek Z and Andrew Kocher aboard Eagle Valley Partners’ C’Havinia. Seven entries started over the imposing Puissance wall set at a height of 5’3″, and the competition continued up through four more rounds as Ward and Kocher jumped head-to-head at the final height of 6’9″. Neither rider was able to clear the wall at that height, leaving them tied for the win.

Ward rode ZZ Top VH Schaarbroek Z in the Puissance competition after the gelding also competed in the Under 25 class with young rider Oliver McCarthy. It was a last minute decision to enter the class, but Ward already knew the horse well and got a little encouragement from longtime manager Lee McKeever.

“We had the horse here with my rider Oliver, and I have actually sold this horse a couple of times and bought him back a couple of times,” Ward explained. “I have not ridden the horse in five years, but he is an easy catch ride. He is a wonderful grand prix horse who really knows his job.”

Ward continued, “Everyone knows the story of Lee and me – we have been together 30 years – and when we were driving here tonight, he said, ‘Why don’t you want to do the Puissance? Are you getting a little chicken?’ I said we didn’t really have a Puissance horse, and he said that horse could do it. I thought about it for a few miles, and I said, ‘Do you think we can still enter?’ He kept saying that I was afraid, and we went back and forth for about 10 miles, and so I told him to enter me in the class.”

Ward is no stranger to Puissance competitions. In fact, he has won many (including seven times at the Washington International Horse Show), and noted that the highest he has cleared is a staggering 7’3″.

Commenting on the Puissance class in general, Ward added, “It is a fun way to end the evening. It gets everybody into the competition, and I think the draw of this class is that it is something that everybody can easily understand – how high can you jump?”

For Andrew Kocher, this was his first time competing at the RCPHS and one of few times he has attempted the Puissance.

“This is my first time here, so we are having a really good time and we were excited to get invited for sure,” Kocher acknowledged. “That mare (C’Havinia) has never done anything like that. I have done the Puissance three times at Washington, and the first time was really bad, but this time I have been practicing for a few weeks. I didn’t have a big enough wall, so I put some hay bales in there to stack it up. It was fun.”

International Equestrian Group and RCPHS founder Mark Bellissimo enjoyed all of Thursday evening’s competition and spoke after the event, thanking riders and sponsors.

“We had great competition tonight. It is interesting to see classes like that happen on a night like this, with perfect weather and a perfect backdrop, so I thank all of the participants for their great effort,” Bellissimo stated. “We want to thanks Canadian Pacific – Hunter Harrison, Keith Creel, and Mark Wallace – they have been very generous supporters of the sport. Events like this are very complex and take a lot of support, and Canadian Pacific has been a great partner with us on this event and we really appreciate. We also have to thank Rolex, who is the title sponsor of the event since the first day. Also Land Rover and Adequan®, who have supported this event for three years. Those four have been stalwarts in making sure that this event has been successful, so I really want to thank them for that.”

Mark Wallace, Vice-President, Corporate Affairs and Chief of Staff of Canadian Pacific, added, “It was great being here this week in New York. I was in Calgary last week for the CP International, and it was a different experience than this was under the lights in Central Park. It is a great event, and we have been a partner here for the last three years. It was fun to watch tonight, and McLain is a little bit a part of our family at CP. He has a close relationship with our CEO Hunter Harrison, so it was exciting to watch him win. Congratulations to everybody, and we are thrilled to be a part of this.”

Course designer Guilherme Jorge saw 14 competitors in round one, with three advancing to the tie-breaking jump-off. Bryn Sadler (USA) and Showcase 81 LLC’s Bon Giorno were first to return over the shortened course, with one rail down in a time of 40.28 seconds to finish third. Coyle followed aboard Susan and Ariel Grange’s Fortis Fortuna, also dropping one rail, but in a faster time of 35.57 seconds for the win. Alexandra Crown (USA) and her own Von Cim were last to go, but were also unable to complete the course without fault, clocking in at 37.35 seconds to finish in second place.

Commenting on his win, Coyle stated, “It is great for me to be here, and to be here for my first time and win. It is the horse’s first time here as well, so I just tried to concentrate on getting a clear round to start off, and I did. It just kind of went my way in the jump-off, so I am really happy.”

Coyle continued, “Conor (Swail) rode the horse and very nicely gave her to me to ride. I won a few classes at Spruce Meadows and Angelstone with her this year, so she has been a very good one for me to get, and I am happy to have her. I had a plan tonight, and I tried to just stick to it.”