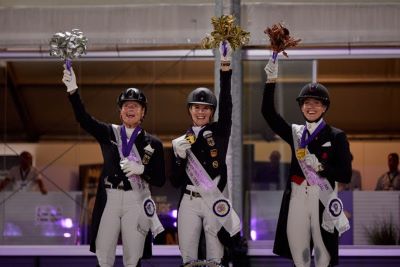 Germany’s Jessica von Bredow-Werndl scooped her second gold medal of the week when coming out on top with TSF Dalera BB in the Grand Prix Special at the FEI Dressage European Championships 2021 in Hagen (GER).

Firm favourites after their spectacular performances at the Tokyo 2020 Olympic Games this summer, the 35-year-old rider and her 14-year-old mare produced the highest score to help their country claim the team title for the 25th time. And they won again, this time pinning team-mates Isabell Werth and Weihegold into silver while Denmark’s Cathrine Dufour and Bohemian took the bronze.

Team silver medallist, Britain’s Carl Hester, set the early target score when posting 77.310 with En Vogue. “That was as good as Tokyo, if not maybe a little bit better – I got the ride I really wanted to get,” said the man who also took team bronze in Japan a few weeks ago.

“He was steady, relaxed, and calm. I always know that if he’s going to be funny, it will be in the piaffes. That’s what he did yesterday (in the team competition) and he gets wilder and wilder. But tonight he was fine. All you want in a championship really is for the horse to grow. I don’t expect to win when he’s this young, but I do it in the hope that he gets better every day.

“The changes tonight were spot on; the piaffes were showing the future of what he can do, because I think there’s a 10 in there for those – not tonight, but they were going the right way, so I was just pleased they are progressing. And the pirouettes,” he pointed out.

Hester was still in front when Werth set off with her mare, fifth-last to go. It was clear from the outset that the German pair who took European Special and Freestyle gold in Gothenburg (SWE) four years ago meant business again. Before starting, Werth made sure Weihegold was listening, practically galloping down the long side of the arena before beginning her test.

“It gives her the fire, and me too!” she said. “I knew I had to fight and take all the risk I could; she’s so experienced in this business, more in the Freestyle than the Special, but this was one of her best Specials, no big mistakes, and I’m very happy with her,” said the lady who won her first European Grand Prix Special title with the great Gigolo back in 1991 in Donaueschingen (GER).

Big marks for piaffe, passage, and pirouettes put her on a score of 81.702 for a strong lead going into the closing stages.

Great Britain’s Charlotte Dujardin followed with 79.787 from her sweet little 10-year-old chestnut Gio, slotting temporarily into bronze medal spot. “It’s only his third Special and I couldn’t ask for much more. He needs more time to strengthen up; he’s getting better and better at every show, and he went in there and tried and did his best, and that’s enough for me,” said the rider who took all the European Individual titles in both 2013 and 2015 with the record-breaking Valegro. However, Denmark’s Cathrine Dufour immediately overtook her with a cracking test from Bohemian that was filled with power, energy, and excitement.

Dufour looked well set to oust Werth from pole position but, although quickly rectified, a mistake on the final centreline proved costly. The quality of the performance was so strong, it still earned a healthy mark of 81.079.

The 29-year-old Dane has been reflecting over the last few weeks. “What I felt in the last few tests was that I had to push him a bit too much in Tokyo, and that’s not at all the way I want to ride him. Today I wanted to build more trust so he doesn’t feel that I push him one thousand percent every time he goes in the ring, because I had the feeling he might not continue to perform with me if I continue to ask for more. But today he was so confident. I could have asked for more, but I want to rebuild that trust and show him that it’s super-nice to be in the ring.

“What Tokyo has taught me is that less is more,” Dufour said. “He will give me the moon as long as I offer trust and space for him to grow, which I feel I forgot the last few times. Yesterday I had a nice feeling but today was even better,” she added.

Britain’s Charlotte Fry was second-last to go with Everdale whose 78.146 slotted them in behind Dujardin, and then only von Bredow-Werndl and Dalera stood between Werth and the tenth Individual European title of her long and illustrious career. But the new world number one was placed first by all seven judges. With marks ranging from 81.277 to 86.596, their final tally was 84.271 for victory.

“Winning in front of the home crowd was great; we’re not used to it anymore.

“When we entered the arena, Dalera became even bigger, put her ears up; she was really excited and when I did the trot extensions, I tried not to move because it could have brought her out of balance, because she was so on fire! It’s a great feeling, especially after the Olympics, that she’s so fit and so happy again,” said von Bredow-Werndl, who seems to have the world at her feet right now.

While the leading 15 horse/athlete combinations go through to Saturday’s Freestyle, only three can represent each country. However, the new Grand Prix Special champion certainly won’t miss the cut. Von Bredow-Werndl looks set to make it a golden hat-trick, with Werth chasing her all the way.

Werth admitted that the last couple of days have been a huge strain for a different reason entirely. Her beloved mare Bella Rose, who took triple-gold at the European Championships in Rotterdam two years ago, has taken ill. But fortunately, there’s good news.

“I’m glad to say she’s fine,” Werth said, when asked about the mare who was due to be officially retired at the CHIO Aachen next week. “Yesterday I got a call from my vet to say she had a colic, so I was really worried. Yesterday evening we had to take her to the clinic because this kind of colic meant you have to operate, because something is in the wrong position. It’s just bad luck; it’s not a typical colic situation. So I’m really happy and very thankful to the vets. She woke up yesterday evening and this morning she ate some grass and looked really good and like normal. She will stay at the clinic a few days and if everything is normal, we will then bring her home. I didn’t get much sleep last night!” Werth admitted.

She should rest well in the knowledge that Bella is fine. And she and Weihegold are likely to come out with all guns blazing when the Freestyle begins.