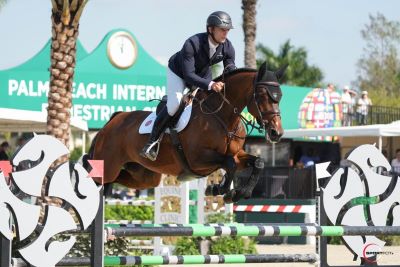 Wellington, FL – March 20, 2022 – Week 10 of the Winter Equestrian Festival (WEF), sponsored by Horseware Ireland, concluded its competition on Sunday, March 20. Richard Vogel (GER) bested 28 of the world’s most promising young show jumpers for the win in the $50,000 Hermès Under 25 Series Grand Prix Final.

The young athletes brought their A-game against Michel Vaillancourt’s (CAN) track, and 11 members of the opening field navigated their way into the jump-off. The time-allowed was an issue for only two riders, and six riders did not advance due to a downed rail. Grace Debney (GBR) took the lead for the return and set a challenge for the remainder of the exhibitors with her time of 37.81 seconds. As the first to go, however, Debney left the door open for two pairs to find a slightly faster clear path around and settled for third place aboard the Temple Equestrian LLC’s 11-year-old Selle Francais mare Boheme De La Roque (Kannan x Quick Star).

Carlos Hank Guerriero (MEX) had one of his best rides to date aboard the H5 Sport Horses LLC’s 11-year-old Hanoverian gelding H5 Chacco San (Chacco-Blue x Sandro Boy). The 21-year-old left all of the rails untouched and sliced over the fences to overthrow Debney by mere milliseconds with a time of 37.76 seconds.

However, the class’s winning ride would come from Germany’s Richard Vogel. Having seen where he needed to make moves for the win, Vogel piloted the Horse Management GMBH’s eight-year-old Hanoverian mare Looping Luna (Lord Fauntleroy x Calido I) over a clear round in 36.16 seconds and knocked over a second off of Guerreiro’s time.

While Vogel won the final grand prix, he also took home top honors for the entire series, which encompassed events over five different weeks of the WEF circuit. The victory felt extra sweet for Vogel who, at the age of 24 years old, is in his final year of eligibility for the Under 25 series.

The $75,000 CaptiveOne Advisors 1.50m Classic CSI4* rounded out show jumping in the International Arena on Sunday of WEF 10. Vaillancourt’s final design of the week was an unbeatable challenge for many, and the class saw only eight combinations advance to the jump-off track. The large starting field included 58 horse-and-rider pairings from 15 nations, but only three of those countries would be represented in the jump-off. Challengers accrued faults in various areas throughout the tough track with the time-allowed of 76 seconds dashing the hopes of three entries and a combination of downed rails alongside additional time penalties disappointing the rest.

Ever the dominating force, McLain Ward (USA) was the first double clear with his newer mount, Kasper Van Het Hellehof. The lead would be short-lived, as Ireland’s Shane Sweetnam upped the ante aboard the Triple S Group’s 10-year-old KWPN mare Holliewood (Nabab De Reve x Diva). Sweetnam, however, would hold the title for mere minutes as his fellow countryman, Darragh Kenny (IRL), once again rode to the fastest time as he blazed forward into the lead with a time of 36.64 seconds.

The victory gallop was poised to be all-Irish until the USA’s Lillie Keenan battled her way into the boys’ club as the final contender on course. Keenan piloted her highly successful partner Skyhorse, a 15-year-old BWP gelding (Calvaro F.C. x Quidam de Revel), to the spot directly behind Kenny with a tight time of 37.20 seconds. Daniel Coyle (IRL) bookended the Irish podium as he stepped into the third-place position aboard Ariel Grange’s 14-year-old Holsteiner gelding Oak Grove’s Carlyle (Casall x San Patrignano Corrado).