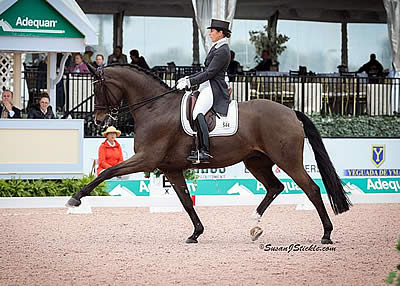 Wellington, FL – January 14, 2016 – The experienced pair of Tinne Vilhelmson-Silfven (SWE) and Don Auriello commanded attention in the Global International Ring on the first afternoon of CDI-W competition at the 2016 Adequan® Global Dressage Festival (AGDF) hosted at Palm Beach International Equestrian Center (PBIEC). The duo, in their first competition since the FEI European Championships in August 2015, received a score of 76.900% for the win in the FEI Grand Prix, presented by MTICA Farm. Laura Graves (USA) and Verdades finished in second with a score of 75.540% and Canada’s own Leah Wilson Wilkins collected third place honors aboard Fabian JS. Competition at AGDF will continue tomorrow with the FEI Prix St. Georges, presented by The Axel Johnson Group, during the day and the first “Friday Night Stars” Grand Prix Freestyle presented by AMCI Group to benefit Brooke USA, beginning at 7pm. The first week of AGDF competition is sponsored by the AMCI Group to benefit Brooke USA.

Vilhelmson-Silfven and her experienced mount Don Auriello, a 2002 Hanoverian gelding (Don Davidoff x Wey o mey) owned by Lövsta Stuteri, wowed in their first performance of 2016, showcasing only a bit of what is to come for the veteran pair, who are looking to qualify for the 2016 Olympic Games in Rio de Janeiro, Brazil.

“I felt very, very good with our ride today. He felt great in the warm-up as well as yesterday. He got a bit excited when he came into the ring, and I think it’s because he hasn’t shown since the European Championships and I could feel that,” noted Vilhelmson-Silfven. “He has like five gears more so I started off a bit careful, but then as we continued he began to settle. I’m pleased, and it was a good feeling to be in the ring again.”

The duo rode in the final group of the day, which saw many of the most seasoned competitors also take their first go at competition in the New Year. Today only offered a glimmer of what is to come for the rest of the AGDF circuit, which will host seven CDIs in total. Vilhelmson-Silfven felt that she and her horse knocked off a bit of rust today and will look to improve their overall performance in the coming weeks.

“I think the power is something that I’ll look for in the future. Just to have it a bit more there on top without losing control, but I’m still very pleased with today,” she noted.

Don Auriello has graced some of the largest stages in the sport of dressage in his career with Vilhelmson-Silfven, including European Championships, World Equestrian Games, World Cup Finals, and the Olympic Games. Bringing a wealth of experience to Wellington for AGDF this year, Don Auriello will be the main mount for Vilhelmson-Silfven, who is on the quest to qualify for her seventh Olympic Games for her home country of Sweden.

“It always makes you feel good to ride an experienced horse because you already know what you have, but still it changes and when you haven’t shown in a while you really don’t know where you are until you’re in the ring again,” she explained. “He has such an extremely nice character and he wants to do his best all of the time. He’s a nice horse to compete because he always tries and it’s rare that he ever puts me into a difficult position.”

Laura Graves and Verdades took to the Global International Ring for the first time since they were crowned USEF Grand Prix Dressage National Champions at the U.S. Dressage Festival of Champions, presented by The Dutta Corp., at the AGDF grounds nearly a month ago, but looked as though they haven’t missed a beat. Graves and Verdades, a 2002 Dutch Warmblood gelding (Florett AS x Liwilarda), have been dedicated to searching for “the next gear” which Graves commonly refers to, and seemed to have found it on the first day of Grand Prix competition.

“I’m really excited to seem to be finding that next gear. We’re getting past that 74% rut that we were stuck in for a lot of last year. That’s really exciting for us and especially what we were able to produce at the Festival of Champions last month carried over into this competition too,” elaborated Graves. “We had a couple of mistakes today that were mine and that’s always a nice thing to say. I’m very fortunate like Tinne to have a horse who tries so hard for me in the ring no matter what.”

Leah Wilson Wilkins (CAN) found herself “flabbergasted” at being seated next to Vilhelmson-Silfven and Graves, as she and Fabian JS earned their first top CDI Grand Prix finish at AGDF. Wilson Wilkins and the 1999 Hanoverian gelding (Feiner Graf x Daloa) led the large Grand Prix class of 38 entries, which included rider representation from 15 nations, for most of the day until the final group.

“Obviously he performed really well for me today since not having been in this ring since January or February of last year. I’m so pleasantly surprised with how it all turned out,” she noted. “I’m excited about our performance. He was just really on for me today and much more relaxed than I expected, which gave me a lot more rideability than I’m used to having. I’m hoping that we will be able to carry that forward.”

Earlier in the afternoon, the Adequan® Global Dressage Festival hosted a media Q&A session on the opening day of CDI competition at the facility. Thomas Baur, Director of Sport at AGDF, Kim Boyer, a major sponsor for the competition, as well as a member of the Wellington Equestrian Partners, Kasey Perry, a United States Grand Prix dressage rider, and Mark Bellissimo, CEO of Equestrian Sport Productions, were each on hand to receive the media.

As the 2016 edition of AGDF competition is set to be the largest in circuit history, talks of expansion were addressed, as more riders, trainers, and owners are flocking to Wellington each winter to participate in the event.

“We are quite excited about this season because we see a true international competition here with fifteen flags already in week one, and we’re expecting that number to grow throughout the season,” said Baur. “This week we had 38 rides in the Grand Prix and in week three it is projected that we will have 55 entries. It’s the first time that we have seen a rider from Asia in the ring this morning and at the end of the month the first rider from Africa will come to join us.”

“We continue to be very excited and this venue has lived up to our expectations, but also exceeded them in terms of what we believed could occur here. The sponsorship is great, the prize money is great, and we’re attracting riders from all over the world,” commented Bellissimo. “I’m very confident that this competition will continue to get larger, and the bigger issue will become how do we expand in a way that is respectful to the people who are supporting it? We really appreciate the owners, sponsors, riders, and everyone who has made this possible. It really is a breath of fresh air for dressage in this country.”

Kim Boyer, who not only represents the Wellington Equestrian Partners, but is also a major sponsor of the event through the U.S. P.R.E. Association and Chairperson of the Dressage Owners Task Force, discussed the importance of High Performance ownership, as well as education of riders as they continue to advance their careers and businesses through their individual successes at the Adequan® Global Dressage Festival.

“We have had four events approved by the Dressage Owners Task Force. There will be two High Performance Owner Receptions. We also will be hosting a Parents’ Reception for High Performance Youth Riders, where we will talk about expectations for moving riders from the national level to the international level,” explained Boyer. “We also will be hosting a Rider Workshop for riders on sponsorship and syndication practices. We’d like to widen their possibilities for sponsorship and support.”

A rising talent in the Grand Prix arena for the United States, Kasey Perry discussed her passion for the sport, and her reasons for returning to AGDF each winter, as she is originally from Northern California. She explained, “There is an atmosphere here that you don’t get at many other shows. When we traveled to Europe this summer, I thought the competition atmosphere here was harder than it was over there, for me. This show really prepares you for competing in Europe. We have wonderful people behind this show, and it’s a great opportunity to be here.”

Competition at AGDF will continue tomorrow with the FEI Prix St. Georges, presented by The Axel Johnson Group, during the day in the Global International Ring before the start of the first “Friday Night Stars” FEI Grand Prix Freestyle, presented by the AMCI Group to benefit Brooke USA, beginning at 7pm. For more information and to see a full list of results, please visit www.globaldressagefestival.com.