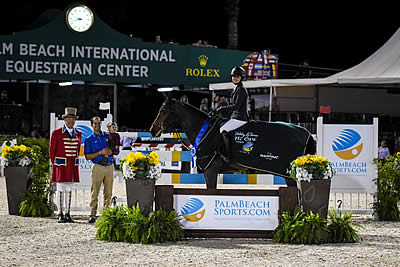 Wellington, FL – December 1, 2019 – Adrienne Sternlicht of Greenwich, CT galloped to victory aboard Starlight Farms 1 LLC’s Just a Gamble in the $209,000 Holiday & Horses Grand Prix CSI 4* presented by Palm Beach County Sports Commission. The pair raced through the timers in 44 seconds flat to take home the champion ribbon. Kristen Vanderveen of Wellington, FL piloted her Bull Run’s Risen to a close second, stopping the clock at 45.91 seconds in the second round. Conor Swail of Ireland claimed third place with Koss Van Heiste, owned by Eadaoin Collins, after a 46.39-second jump-off round.

The first night class of the ESP Holiday Series saw a total of forty-six entries contest the track, built by FEI designer Anthony D’Ambrosio. The course challenged many riders in round one, with only four total combinations finishing with double-clear efforts at the end of the evening. Sternlicht explained, “For the first round, there were a few elements that I had to be disciplined about as a rider. My horse is extremely hot, and I knew I had to add [strides] in several places. With her, I worry about managing her anxiety a bit, so I wanted to be smart and take my time in necessary spots, while also getting myself a good position for the second-round.”

The top twelve riders returned for a second round. Sternlicht and Just a Gamble were the penultimate pair, and had a lot to prove in this class: “It’s my horse’s last class of the year and we’ve had some serious ‘four-fault-itis,’” commented Sternlicht. “We’ve had four faults in the past seven Grand Prixs that we’ve jumped, so I wanted to end the year on a different note and I knew I had nothing to lose! She is incredibly fast naturally and has great foot speed, and she’s so willing and brave, so I tried to take advantage of all those attributes as well as her big stride. I sort of believed in that double leave out to the last jump, and it worked out so I’m very thankful!”