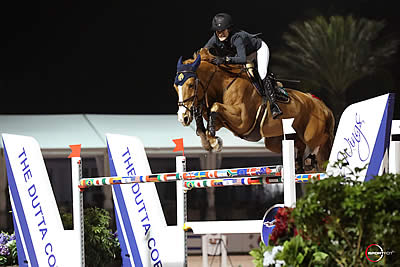 Wellington, FL – February 14, 2020 – It was a sweet victory for Jessica Springsteen (USA) and Volage du Val Henry in the $137,000 Grand Prix CSI3* at “Friday Night Stars” in the Global Ring at Equestrian Village (home to the Adequan® Global Dressage Festival) during week six of the Winter Equestrian Festival (WEF) on Friday, February 14.

From a starting field of 37, nine horses advanced to the tie-breaker over tracks set by course designer Ana Catalina “Catsy” Cruz Harris (MEX). With only one to follow behind her, Springsteen wowed the crowd by taking over the lead by less than one-hundredth of a second in 36.04 seconds.

“I thought I would still try to go fast in case I knocked one down because she’s such a fast mare,” said Springsteen of her plan for Volage du Val Henry, an 11-year-old Selle Français mare (Quidam de Revel x Cassini I), owned by Stone Hill Farm. “I thought I had fence one down and got really distracted, but she jumped amazing. I’m really lucky to have her; she’s such a talented mare, and she really tried her heart out tonight.”

The first division to compete in the International Arena on Friday was the 3’3” Junior 15 and Under Hunters, and the class was held in a California-split format due to the high number of entries. Top honors in Section A went to Sterling Malnik of Ocean Ridge, FL and Rockette, owned by Ramble On Farm.

Malnik rode the 12-year-old mare to two firsts, a second, and a ninth-place finish, and she is thankful to have the experienced mare as her partner.

The Section B championship went to Raina Swani aboard Fetching, owned by Shadowfax Equestrian LLC. Swani, of Ponte Vedra Beach, FL, and Fetching earned a first, second, fourth, and fifth place in the division. Swani has only been riding the 11-year-old Holsteiner gelding (Catoki x Riene I’Ve) since December when she took over the ride from her sister, Isha Swani.