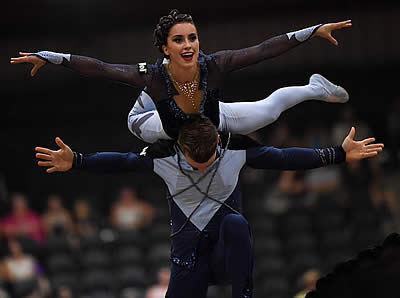 In a breathtaking finale to Vaulting at the FEI World Equestrian Games™ in Tryon, USA, Team Germany, their individual female star Kristina Boe, and Lambert Leclezio from France all took gold under supreme pressure in the Christie’s International Real Estate arena.

Boe, a formidable competitor and ambassador for the sport, now holds the European, World Cup, and World Championship titles.

Her innate story-telling and characterisation have been stand-out characteristics throughout her years of success in the sport.  Her astonishing achievements have been aided by her incredible relationship with lunger Winnie Schlüter and the impressive horse Don de la Mar. Posting an unbeatable combined score of 8.388, she managed to halt the challenge launched by compatriot Janika Derks.

“As a result of the new Nations Team Championships, it is the first time that it is possible to win two medals for an individual.  To come away from Tryon with two gold medals makes me speechless and more than grateful,” Boe said.

“Last night, Winnie and I sat together and said all that we hope for this last freestyle is to do one round in utter harmony, where I can enjoy my performance. I love my music, my whole programme and I didn’t even care what would come in the end. I just wanted to have that one goose-bump round.” — Kristina Boe (GER)

Derks, who took the bronze medal alongside Johannes Kay two days ago in the Pas de Deux competition, came out all guns blazing.  With Carousso Hit and renowned lunger Jessica Lichtenberg, her final freestyle highlighted her impressive strength yet was beautifully contrasted with classical music. Finishing on 8.374, she kept the pressure on Boe right to the end. Bronze went Austria’s Lisa Wild for the second time this week.

The highest freestyle score of the day went to Germany’s Sarah Kay who posted 8.880 in the final test (8.308).  However, her assault on the medals came too late in the competition as she finished on a combined total of 8.308 to line up fourth.

Lambert Leclezio from France dominated the individual male category as his execution, artistic impression, and utter control meant he was in a league of his own. “It is the accumulation of hard work over the past four years. Every day waking up with the end goal of the 2018 World Equestrian Games in mind. It is a real honour to win here for France,” he said. He got a standing ovation from the Tryon spectators as he once again changed the face of the sport.  It was his partnership with Poivre Vert and Francois Athimon that allowed him to perform with such confidence to finish on 8.744.

This lunger and horse partnered Jacques Ferarri to the gold medal four years ago in Normandy (FRA), so it was a very special moment when they did it all over again, but with a new vaulter this time around. Poivre Vert, who has done so much for the sport, will now retire.

“This was his last competition and I had the honour to finish his career. He is an amazing horse and by far the best I have competed with. I spent one year with him; it was short but really intense,” Leclezio said.

“I have had him for ten years and he is an absolute warrior! He is mentally very strong and the most incredible horse – unbelievably reliable.” — Francois Athimon (FRA)

The standard throughout the class was exceptionally high, but it was Germany that continued their impressive form to secure both second and third places on the podium. A second silver at these Games went to Jannik Heiland on Dark Beluga lunged by Barbara Rosiny, who were consistent, fluid and harmonious to finish on 8.606. Fellow-countryman Thomas Brüsewitz claimed bronze supported by Danny Boy who was lunged by 2010 Individual Male gold medallist Patric Looser (8.533), and who managed to overtake yet another of the powerful German contingent, Jannis Drewell (8.509).

The squad championship was a perfect conclusion to an amazing week. With only 0.001 separating overnight leaders Team Germany and Team Switzerland it was always destined to be a nail-biting final and it was the Germans who really rose to the occasion, leaving no doubt that they would walk away double gold medallists from these Games.

With competitors taking to the arena in reverse order of merit, it was the Swiss who were the first of the two big-hitters to stake their claim to the title. But with gold on the line they had some nervous moments and had to settle for silver together with their horse Rayo de la Luz and lunger Monika Winkler-Bischofberger (8.433). However, their head-to-head battle with Team Germany will go down as one of the greatest of all time.

Last to go, the German squad produced a stunning performance of their captivating ‘Now You See Me’ freestyle. With their horse Danny Boy and Patric Looser on the lunge they looked at ease despite the immense pressure and their freestyle, laced with big lifts and eye-catching dismounts, delighted both the audience and judges alike.  By the end of their routine gold was guaranteed (8.638).

It was Team Austria who rounded off the podium, taking bronze alongside Alessio L’Amabile and Maria Lehrmann on the lunge (8.198), with USA in fourth (8.000) and Italy in fifth (7.986).