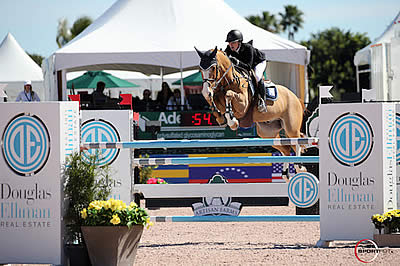 Wellington, FL – February 17, 2016 – Week six of the 2016 Winter Equestrian Festival (WEF) began Wednesday morning with jumper competition at The Stadium at the Palm Beach International Equestrian Center (PBIEC) in Wellington, FL. While hunters take center stage on the main show grounds for World Championship Hunter Rider (WCHR) week, the international jumpers get a fresh change of scenery competing in both the International Ring and the Derby Field at The Stadium Wednesday through Sunday. The feature Saturday Night Lights event will be the $100,000 WCHR Peter Wetherhill Palm Beach Hunter Spectacular on Saturday, February 20.

For the opening $35,000 Douglas Elliman 1.45m Jumper Classic on Wednesday, Canada’s Vanessa Mannix jumped to her first victory in an FEI World Ranking Class at WEF. Mannix and her own Dooley’s Deluxe topped a starting field of 48 competitors over the Richard Jeffery (GBR) designed speed track.

In Wednesday’s 1.45m, nineteen entries jumped clear through the course as time came into play. Mannix and Dooley’s Deluxe clocked the winning round in 65.38 seconds. The pair pushed Shane Sweetnam (IRL) aboard Sweet Oak Farm and Seabrook LLC’s Main Road into second place with their time of 65.88. Cormac Hanley (IRL) and Peacock Ridge LLC’s Lumiere finished third in 67.47 seconds.

Mannix found the way to victory over two very fast Irish riders with the help of her trainer and Irishman, Conor Swail.

“Conor gave me such a good lesson the other day at home. We were practicing our turns and we were practicing my pressure with my leg,” Mannix detailed. “Conor is such an incredible coach and everything I can do in the ring I have him to thank for.”

“I have never won a ranking class here, but it is actually funny because I was second in this exact same class last year,” Mannix laughed. “I came in today knowing that my horse loves this ring and that he can be so fast against the clock, so I was really excited to be one better than last year and win our first ranking class here at WEF.”

Speaking of Dooley’s Deluxe, a 12-year-old Sachsen gelding (Dinglinger x Lesotho), Mannix stated, “He is a horse that I have had for a very long time. I bought him from a good friend of ours in Ireland. We really came up the ranks together. I used to jump the mediums, and then I jumped the highs, and the last few years he has really become my most reliable 1.45m speed horse. He loves to go fast and he is so brave. Anything I ask him to do, he wants to do for me.”

Describing her winning route on course, Mannix explained, “I left a stride out down the first line. He has a huge stride, so I know that as long as I have a good rhythm, he can always get down the lines. Then I thought I had quite a good turn back from three to four. It was quite a tight turn back and I thought I did that smoothly. Then down the far side everyone was going six strides and seven strides, and I went five and six, again just using his stride to my advantage. I knew once I was going to the triple (combination) that I was going nicely and just to try to be smooth home.”

Mannix enjoyed the change of venue and noted that Dooley’s Deluxe also loves the more intimate arena at The Stadium.

“He loves this smaller arena and this is one of my favorite weeks because I think it is so nice to have a change of scenery,” Mannix acknowledged. “It freshens the horses up a little bit and also it is a different challenge because the International Ring, while it is such a great ring, it is huge and you have so much time to think. It is kind of fun then to switch it up and have to be a little bit more on the ball in the tighter ring.”

Also competing at The Stadium on Wednesday, the $6,000 1.40m speed, sponsored by Illustrated Properties, was held with a win for Quentin Judge and Double H Farm’s HH Memphis.

While jumper action continues at The Stadium on Thursday, the second day of WCHR competition will host the first of its championship presentations on the main show grounds. For more information and full results, please visit www.pbiec.com.