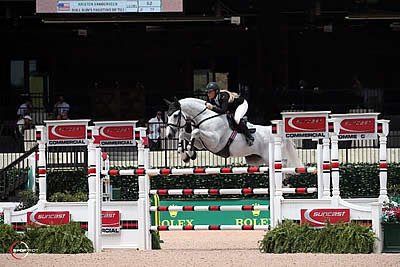 Mill Spring, NC – May 31, 2017 – Kristen Vanderveen (USA) and Bull Run’s Faustino De Tili were the pair to beat in the $35,000 1.45m Suncast® Commercial Welcome Stake CSI 3*, stopping the timers in 32.039 seconds for the win at Tryon International Equestrian Center (TIEC). This starts the first of two weeks of FEI competition, boasting world-class show jumping at the venue to kick off the 2017 Tryon Summer Series. Second place honors were awarded to Andrea Torres Guerreiro (COL) aboard Fifty Shades, who completed the track with a time of 32.539 seconds, while Kaely Tomeu (USA) guided Gentille to the third place position with a time of 33.675 seconds.

Vanderveen and her flashy grey mount made quick work of the track set by Michel Vaillancourt (CAN), besting the twelve entries that advanced to the jump-off round. Seven combinations finished the afternoon with a double clear effort in both rounds.

Vanderveen was thrilled with how the pair’s first day of competition finished and detailed the course, saying, “I thought today was really nice as a welcoming course for our first class here. There was a lot of space between the jumps, so for my horse he was quite excited to be here. He was a little bit strong, so the space gave me time to get him back and set him up well, especially for Saturday. The jump-off also had a lot of right turns and I favor the left turns, so it was good practice for me.”

Vanderveen and Bull Run’s Faustino De Tili have been a very successful team over the past three seasons, with a major highlight win at TIEC in the $380,000 Horseware® Ireland Grand Prix CSI 5* in June 2016, the first CSI 5* event hosted at the venue. Vanderveen continued to elaborate on Bull Run’s Faustino De Tili’s strengths, as the pair has only grown together this season.

“He has really come a long way. He is so fast for such a big horse. Everyone looks at him and thinks he’s not going to be quick enough, but he is probably one of the fastest horses I’ve ever had. He listens so well and everything is right on cue.”

At first, Vanderveen was skeptical of riding the 2005 Belgian Warmblood stallion (Berlin x Darco), owned by Bull Run Jumpers Five LLC, but she described how special he has become to her and her team.

“He is really like a puppy,” she said. “He is such a nice boy for being a stallion. I’ve always been a little hesitant to ride the stallions because I didn’t grow up riding them much, but is very kind in the stall and overall is quite sweet.”

After her win, Vanderveen is already looking forward to the highly anticipated class of the week, the $130,000 Asheville/Greenville BMW Centers Grand Prix CSI 3* on Saturday, June 3, beginning at 8:00 p.m. She is hoping to have two horses entered in the class. The pair amassed several solid results in Wellington, FL during the winter circuit at the Winter Equestrian Festival (WEF) and Vanderveen is preparing Bull Run’s Faustino De Tili to take on a larger role in the competitive grand prix classes throughout their summer schedule.

“At WEF, I really just used him as a speed horse, so I am excited to use him again in the big class as my main horse because he considerably faster than my other rides,” Vanderveen detailed. “We love it here. The horses stay happy, the clients love it, and I like it! Everything is set up quite well here, and everything is very close. It is so convenient and my feet don’t get too tired walking around here,” Vanderveen added with a smile.

Brittni Raflowitz (USA) and Hope Van’t Zorgvliet, a 2007 Belgian Warmblood gelding (Chacco Blue x Darco) owned by Brittni Raflowitz & ESI Show Jumpers, took top honors in the $6,000 1.40m Nutrena® Power & Speed Opener CSI 3*, after finishing with a time of 32.442 seconds. Schuyler Riley (USA) and Take Me 2 rode to second place with a time of 35.02 seconds, ahead of Todd Minikus (USA) and Sancento, who completed the track with four faults and stopped the timers in 33.49 seconds.