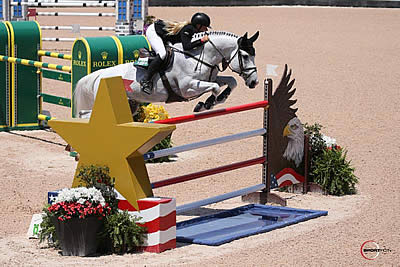 Of her well-known mount, Vanderveen commented, “He’s been feeling really good for the past couple of weeks, but it just hasn’t really gone our way the last few times. Today, he felt great. I had a great warm-up and I thought that going in. The course was really well done. It was just enough that it was fun and competitive, but not entirely out of control.”

Vanderveen and Bull Run’s Faustino de Tili have become fan favorites at TIEC as the pair have amassed an impressive record at the venue over the past few years. Vanderveen plans to continue her season in Tryon, competing in next week’s CSI 4*, before taking a small break.

“I’ll be competing here in next week’s CSI 4*,” she explained, “and we’ll actually take a break for two weeks after that. It’s been a while since we’ve had that kind of break and then we’ll be back here for a few weeks. My fall season really picks up this year. I’m trying to develop some of my eight- and nine-year-old horses, so that I have some coming up behind Frosty.”

The pair is coming off an intense spring campaign that included representing the United States at the FEI World Cup Finals™ in Paris, France at the end of April. Of her first European experience, Vanderveen said, “It was great and it was my first time going over to Europe, so that in and of itself was great to experience. I think you realize once you’re there that when you’re here in Tryon, you compete with just as good a quality of riders. It was helpful to have that to keep expectations realistic and to understand that it’s not necessarily a whole new sport over there. It’s the same.”