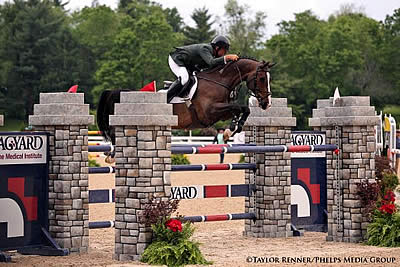 Lexington, Ky. – May 23, 2016 – Aaron Vale has widened his early lead in the 2016 Hagyard Challenge Series by claiming the second place prize for the second week in a row during Thursday’s $34,000 Hagyard Lexington Classic CSI3*. Vale, who has been competing at the Kentucky Horse Shows for 28 years, piloted Quidam’s Good Luck to a double-clear round, finishing just shy of the winner, Todd Minikus and Quality Girl. The Kentucky Spring Classic also featured the second event for the $5,000 Hallway Feeds USHJA National Hunter Derby series, where Geoffrey Hesslink earned the second place prize to further his lead in the standings.

During the first event of the Hagyard Challenge Series Vale placed second and third to claim the early lead. Pablo Barrios of Venezuela continues to hold the second place position in the standings after claiming the victory in the first leg of the Series aboard ASD Farfala. Todd Minikus and Quality Girl are just 30 points behind Barrios after winning Thursday’s highlight event.

Hagyard Equine Medical Institute is one of the oldest and largest equine veterinary practices in the world. Founded in 1876, the institute offers a staff with qualifications unparalleled by any single non-university veterinary group in the equine industry, and Hagyard veterinarians have dedicated themselves to the health and well-being of the horse.

The facility at Hagyard Equine Medical Institute offers 13 digital radiology systems, 1.5 Tesla Siemens MRI, nuclear scintigraphy, an on-site laboratory, an on-site pharmacy, full medical and surgical services, 24-hour emergency services and hyperbaric medicine. The practice has performed veterinary medicine for more than 137 years and is currently composed of over 50 experienced veterinarians, with 13 board certifications in specialty areas of medicine, surgery and theriogenology.

The Kentucky Spring Classic also featured the $5,000 Hallway Feeds USHJA National Hunter Derby, the second event in the 2016 Hallway Feeds series. Hesslink took home the second place honors with Esco, which was combined with his first and third place ribbons during the first week to take over the lead in the standings. Aaron Vale earned the victory during the Kentucky Spring Classic with Madewell to move into the second place position, while Hunter Holloway rounds out the top three and is the leading junior competitor.

The five-part series will feature a $5,000 Hallway Feeds USHJA National Hunter Derby throughout the spring and summer, and at the conclusion of the series the Leading Rider Bonus will be presented.  The $15,000 Hallway Feeds Leading Rider Bonus will award a $10,000 cash prize to the professional rider accumulating the most points in the five classes that make up the 2016 Hallway Feeds series. The series-leading amateur and junior riders accumulating the most points will each receive a $2,500 cash prize. Riders will receive points only on their highest placed horse in each of the classes. The awards will be presented at the conclusion of the Hallway Feeds class at the Bluegrass Festival Horse Show on August 21.