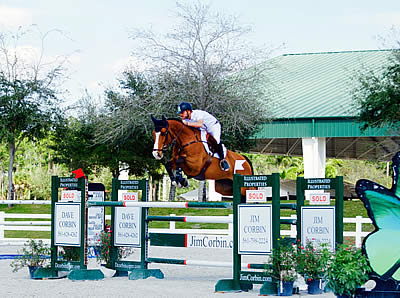 West Palm Beach, FL (February 23, 2017) – Week 7 of the Palm Beach Series once again featured some of the best in the business trying their hand over the spectacular course designs and pristine footing of the Jim Brandon Equestrian Center. The 13-week series opens each Wednesday with full jumper divisions, as well as USEF Equitation Tuesdays, Hunter Derby Days, the spectacular venues of the Turf Tour, and Palm Beach Series Schooling Dressage. With FEI ‘O’ course designer Leopoldo Palacios setting the stage in the jumper rings, The Ridge Palm Beach Series highlighted its traditional $15,000 1.40m Grand Prix and debuted a new addition to 2017’s roster, a weekly $5,000 1.30m Open Stake. Tuesday, February 21 also saw the third of the Palm Beach Series Schooling Dressage shows, this time with USEF S and FEI 4* Judge, Janet Foy. With a focus on bringing a utopian, nurturing atmosphere to elite horse shows, The Ridge brings a unique compliment to Wellington’s winter show circuit as well as a series of events throughout the spring, summer, and fall in New Jersey.

Fresh off a clear effort at the 2017 Longines Palm Beach Masters the week before, Alanso Valdez Prado and Chichester 3 tackled a challenging course offered by Palacios, mastering the variety of distances and jumps to put in the class’s only double clear effort, finishing with a jump off time of 41.922 seconds. Despite setting the pace early and with a slew of accomplished Grand Prix competitors chomping at the bit to best his time, only Alexa Wiseman and Tyrol D’anto were able to clinch a first round clear with faults in the jump-off for second place, followed by Linda Seridin and Vantina Hpf.

As a World Equestrian Games and Olympic competitor for Peru, Valdez Prado and the scopey 2008 Holsteiner gelding (Casall x Cosimo) proved their proficiency over Palacios’ course. The Venezuelan born designer has provided courses for multiple Olympic Games, the World Cup Finals, and Spruce Meadows Masters as well as for the 2016 Turf Tour, and joined the Palm Beach Series during Week 7 to provide his trademark blend of diversity and development through jump designs.

“I love to design here [at the Palm Beach Series],” said Palacios. “The footing is excellent, which gives me the confidence to design the way I love and the horses jump better on great footing. Most important for me is maintaining the soundness of the horses, and this all-natural, sand footing is an excellent medium for them to work with. For the Grand Prix I wanted to design something that was not too big, but that would easily produce faults. A clear round is a reward for an excellent ride, and I try to test everything, long distances, short distances, a variety of combinations and jump types, so that all horses have an equal opportunity, not just those that are talented with either a fast or slow course. Every course needs to be a challenge, not dangerous, and a way to build horses and riders towards bigger and better classes.”

Following Friday’s Grand Prix, a group of top 1.30m competitors ventured out to test their hand in The Ridge Palm Beach Series inaugural $5,000 1.30m Open Stake, which now serves as the anchor class for the series 1.30m division, which includes daily $1,000 and $2,500 1.30 jumper classes. Designed as an enticing option for 1.30m horses and riders to build their skills as well as take a shot at elevated prize money, Saturday’s $5,000 1.30 Open Stake drew a determined line-up and thrilling competition at Jim Brandon.

Lynsey Whitacre and her own Zorzuela Leuze Z emerged victorious following their double clear effort and jump off time of 40.224. Their round overtook the pace setting time of Brooke Gunther and Casual Pleasure, who made the course look like a casual pleasure with the first double clear and a time of 40.643. A late effort by Olympian Marie Antonette Leviste of the Philippines and her mount Loribri rounded out the top 3 in the Open Stake.

The course, which was also of Palacios’ design, followed his standard of including a Liverpool, skinny, plank, and triple bar, as well as a variety of combinations. While Friday’s Grand Prix featured 2 triple combinations, Palacios developed 3 double combinations for the 1.30m Open Stake, including a unique triple bar to vertical in the Animo combination.

“I purchased Zarzuela, a 15-year-old Zangersheide mare, from Andy Kocher about a one and half years ago,” said Whitacre. “She is affectionately known in our barn as ‘Fat Amy’ due to her eccentricity and passion for food. This was my first time showing her at The Ridge, and I think she really liked it! She jumped incredible up off the footing and felt really confident and comfortable there. The course Leopoldo set asked some tricky questions, but I liked the challenge and uniqueness of it. The Palm Beach Series is a real breath of fresh air. We will definitely be back.”

The elegance of dressage temporarily replaced the power of show jumping on Tuesday, February 21 at Jim Brandon Equestrian Center, as Janet Foy brought her international experience to the lineup of riders showing in everything from Training Level to the FEI. Organized by Katja Eilers in tandem with The Ridge at Wellington, the Palm Beach Series Schooling Dressage expands the show’s brand into the Olympic discipline, offering riders a chance to ride under USEF & USDF certified judges in a relaxed, welcoming atmosphere. Beginning at 4pm every other Tuesday, Jim Brandon’s spacious warm ups, exceptional footing, and relaxed environment combined with The Ridge’s world class show offerings are growing in popularity with dressage riders as well as jumpers and hunters. From green horses and riders in need of show experience, to CDI competitors looking to fine-tune their freestyles under Jim Brandon’s stadium lights, the Palm Beach Series Schooling Dressage welcomes riders back March 7th.

“It’s great that they are featuring USEF and USDF judges, and this is a great place to introduce the horses or work through any growing pains moving up the levels,” said Foy of the Palm Beach Series. “It’s a lovely venue with excellent footing, perfect for riders to take advantage and further develop their horses. They get the feel of a big show without the pressure.”