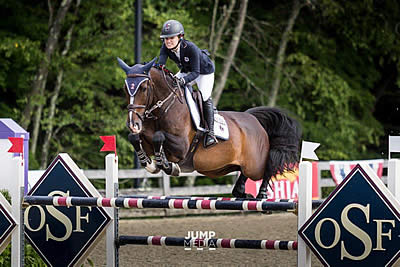 Gochman earned the award after being the highest placing United States Young Rider at the 2019 NAYC in the Individual Show Jumping Final, held this year from August 1 to August 4 at Old Salem Farm in North Salem, New York. Gochman’s sister, Mimi Gochman, took home the gold medal in the junior division.

With the ongoing mission to support and further the level of America’s developing horses and athletes, the USET Foundation Maxine Beard Show Jumping Developing Rider Award was established to elevate athletes’ opportunities on their journey to equestrian excellence.

“It was a great week for the Gochman family!” said Sophie. “I think we’re both just really grateful for our parents, who supported us, our trainer Ken Berkley, everyone at our Baxter Hill Farm, and [Zone 2 Chef d’Equipe] Ralph Caristo. I don’t think many sister pairs have won gold medals at NAYC, so it’s pretty cool that we got to do that.”

Sophie rode Gochman Sport Horses LLC’s Carola BH, a 12-year-old KWPN mare, to earn a spot on the podium wearing the gold medal after her incredible performances over the course of a few days.

“This week was a bit of nail-biter for me because it was so close between me and Sam [Walker],” Sophie said. “But [Carola BH] is the best horse in the world, and she kept getting better and better. It was great for it to all come together. To win at NAYC and get to do that victory gallop is such an honor. I’m just so thankful for [Carola BH]. We’ve created such a bond at this point that I just think it and she does it for me. She puts her heart into every single round.”

The top U.S. athletes were selected to go to compete in the 2019 FEI Jumping Nations Cup Youth Final in Opglabbeek, Belgium this September, so Sophie will be venturing to Europe shortly alongside bronze medalist Natalie Dean, and is hoping for further success with the United States Young Rider Teams.

As the winner of this immense honor, Sophie will also receive a trip to a senior FEI Nations Cup Show Jumping competition. This will give the young athlete a look at a major international competition, including the chance to observe operations in the horse show office, stabling area, veterinary inspections, and schooling rings. Sophie will also walk and discuss each course and have the chance to strategize with U.S. team riders and the chef d’equipe.

Sophie expressed, “I am looking forward to learning from some of the best riders in the world, and I hope that the lessons I learn from observing a senior Nations Cup will not only better my riding, but also my horsemanship.”

Sophie acknowledged how having the support of the USET Foundation has benefited her as she continues on her path toward competing for the United States at the highest level of the sport.

“It’s such an honor to receive the Maxine Beard Award,” Sophie concluded. “It means a lot to me to have the support of the USET Foundation because it’s so important to invest in young riders as they’re the future of the sport.”