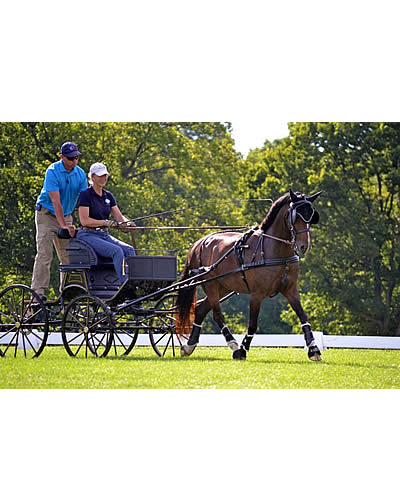 Lexington, Ky. – Three years ago, the United States Equestrian Federation (USEF) launched an innovative Developing Driver Program to provide supplemental training opportunities for American combined drivers who demonstrated a commitment to the goal of competing at the USEF/FEI level and who were in pursuit of competitive excellence. The eventual goal was to increase the number of drivers and their horses/ponies competing at high performance levels, therefore developing the drivers that could become be future international competitors for Team USA.

So far, the strategy seems to be working: if the results from the recent competitions are any indication, including the CAI2* Hermitage Classic CDE held October 14-18, 2015 in Goshen, Ky., the program has proven to be wildly successful. Five drivers who competed in this year’s program, including the most recent clinic held October 9-11 at Hillcroft Farm in Paris, Ky., dominated their divisions at Hermitage, including:

“There is no doubt in my mind that the USEF Developing Driver Program has literally changed our lives,” said Jennifer Keeler. “Before we started, my husband and I had no real idea of where we might go with competing in driving. But now, we see the possibilities, we’re passionate about the sport, and dare to dream big dreams. We are so grateful for this opportunity and hope that the program can continue so that others can share in this tremendous experience.”

“I couldn’t be more pleased to see how this program has grown,” said Misdee Wrigley Miller, whose generous support underwrites the majority of the USEF Developing Driver Program. “To watch how the progress made by each driver and horse during the training sessions translates into these kinds of results in the show ring is so exciting, and I think it bodes well for the future of high performance driving sport in this country.”

Miller hosted two of the five clinics which were held across the country in 2015 at locations in Kentucky, Florida, California, and New Jersey, all conducted by renowned experts including World Champion driver Thorsten Zarembowicz, World Equestrian Games medalist James Fairclough, and international driver Olof Larsson. “Having a program like this where we can actively identify and develop up-and-coming drivers and horses is critical to the U.S. performing well on the international stage. I can’t stress enough how vital this pipeline is in order to remain competitive with the rest of the world,” said Zarembowicz. “While we always welcome new drivers into program, it’s also important to see some of the most promising combinations come back to the clinics over and over in order to monitor their development and encourage continued growth.”

“I can honestly say I wouldn’t be where I am today without the Developing Driver Program, and I’m living proof that it’s successful,” said Denise Hinder, who drove 1100 miles from her home in Mount Vernon, Texas to participate in the latest Kentucky clinic and then the Hermitage Classic CDE with her pony Alamo’s Ruby Red. “This is a life-long dream of mine to get to this level, and thanks to this program I’m achieving my goals. In just six months of being a part of this program, I’ve gone from the Preliminary level to now planning the start of my FEI career. It’s been an eye-opening experience. And it’s not just the support of the coaches, it’s also from the other drivers – to work with such phenomenal people is incredible. I’m so thankful for the coaching and support so that I don’t feel like I’m making the struggle to climb the competitive ladder all by myself.”

Fellow competitor Carrie Ostrowski agreed. “Being part of this program has been a priceless opportunity for me,” she explained. “To have access to this quality of instruction as well as the encouragement and support to progress through the levels is invaluable. Our dramatic progress over the last year with King has been due largely in part to the coaching I’ve received as part of this program. Thorsten is not only so good at his trade as a driver himself, but he is also able to verbalize what he’s doing and teach students effectively. So he can drive my horse and improve him, but even more importantly he can effectively teach me how to go home and do the same thing. That makes all the difference. I’m so grateful for this opportunity and so thankful to Misdee, USEF, and the USET Foundation for making this program a reality, because many drivers like me would not otherwise be able to afford this level of instruction.”

USEF Director of Driving Lizzy Staller reports that dates and locations for the 2016 Developing Driver Program are expected to be announced by the end of the year. This program depends upon the continued support of drivers and sponsors, and tax-deductible donations are welcomed through the United States Equestrian Team (USET) Foundation (www.uset.org). For more information regarding the USEF Developing Driver Program, visit the USEF website or contact Lizzy Staller at estaller@usef.org.