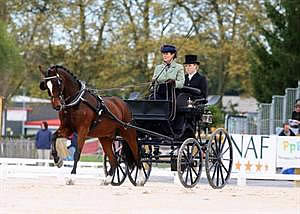 Pau, France – At the conclusion of the first phase of the 2013 FEI Pony World Driving Championships, the United States stands in sixth place on a total of 158.60. On Friday, the Single Pony competitors went to task before the Ground Jury of Klaus Christ, Anne-Marie Turbe, Diana Brownlie, and Dot Wilcoxson. On the second day of the driven dressage the United Sates was represented by Tracey Morgan and Paul Maye.

Morgan (Beallsville, Md.) drove her own Fuego 88 to a top-10 placing in the Single Pony Championship on a score of 48.77.The 2013 USEF National Combined Driving Single Pony Champion looks to climb the leaderboard on Saturday’s marathon when she sets off in eighth place.

Maye (Fairfield, Va.) and Harmony Sporthorses’ Markus earned a score of 59.39 and will head onto the marathon in 19th place.