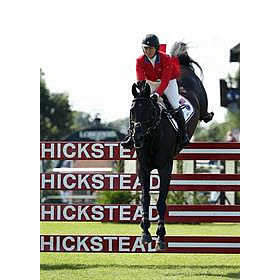 Hickstead, GBR – The Hermès U.S. Show Jumping Team put forth a great effort in Friday’s Furusiyya FEI Nations Cup of Great Britain presented by Longines at CSIO5* Hickstead. At the end of the two rounds, the U.S. team, consisting of Laura Kraut, Charlie Jayne, Beezie Madden, and Todd Minikus, was tied with Belgium and Switzerland with a total of four faults, requiring a jump-off. Madden returned to the Hickstead Stadium with Cortes ‘C’, but an unlucky eight-fault round put the U.S. team in third place at the end of an exciting day of competition.

“First off, it was a spectacular Nations Cup, with good weather and great footing at probably one of the most traditional venues there is here at Hickstead. Our team had a really good day today,” said Chef d’Equipe Robert Ridland. “We put ourselves right in the mix, which we always seem to do. We had a very good second round, as we have several times this year. Then jump-offs, of course, are where things are won in the sport. We would have loved it if we won, but we are honored to be in the position we are in and finish.”

The U.S. team began its day at the Longines Royal International Horse Show jumping sixth in the order of eight teams. Pathfinders Kraut and Nouvelle, the Evita Group’s 2004 KWPN mare, had a single rail at fence nine for four faults. Jayne was next with Alex Jayne and Maura Thatcher’s 2003 Zangersheide stallion, Chill R Z, having a rail at fence two and a single time fault for a total of five faults. Minikus and Babalou 41, a 2005 Oldenburg mare owned by Two Swans Farm, laid down the first clear round for the U.S. team. Madden and Cortes ‘C’ followed suite by scoring another clear round, giving the U.S. team a first round total of four faults, putting them in third place.

For the second round, Kraut and Nouvelle improved upon their initial performance to go clear. Jayne and Chill R Z unfortunately had rails at fences nine and 12 for eight faults. Minikus and Babalou 41 and Madden and Cortes ‘C’ went clear to be amongst the nine combinations to have double-clear rounds. Adding nothing to its first-round total of four, the U.S. team was tied with Belgium and Switzerland at the end of the second round, leading to a jump-off to determine the winning team.

Madden and Cortes ‘C’ were chosen for the jump-off and were the first combination to enter the arena. However, a win was not meant to be, as a rail came down at 4A followed by a runout at 4B for eight faults. Belgium claimed top honors as Pieter Devos and Dylano clocked a clear round in a time of 42.60 to finish ahead of Switzerland’s Janika Sprunger and Bonne Chance Cw with their clear round in a time of 44.17.