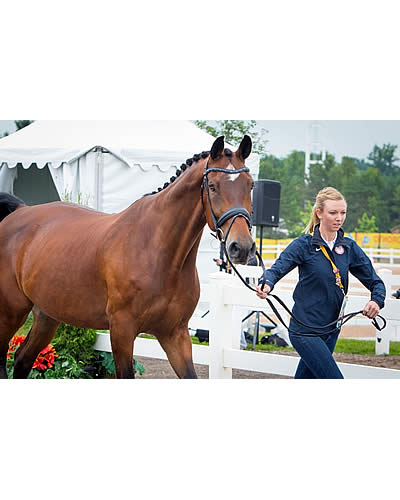 Caledon, Ont. – The 2015 Pan American Games equestrian competition will begin tomorrow with dressage. New for the 2015 Pan American Games, dressage teams may be comprised of both Small Tour and Big Tour combinations. The following nations have entered at least one Grand Prix combination in team competition and are thus eligible to compete for 2016 Olympic qualification: Argentina, Canada, Mexico, and the United States. The remaining six teams have entered Small Tour combinations only, but are still eligible to compete for team medals. Competition gets underway tomorrow at the Caledon Equestrian Park with the first day of team competition. Small Tour combinations will contest the FEI Prix St. Georges test, while Big Tour competitors will perform the FEI Grand Prix test. All United States horses passed inspection yesterday. There were two draws, one for each tour, and the U.S. has drawn fifth in the order for the Small Tour and fourth in the order for the Big Tour. The U.S. will ride in the following order with Small Tour combinations competing first, followed by Big Tour:

The stakes are high as the team of Laura Graves, Steffen Peters, Kimberly Herslow, and Sabine Schut-Kery aim to qualify the U.S. for the 2016 Olympic Games. Direct qualification will be secured by earning the Pan American Games Team Gold medal.

“All our U.S. combinations had a wonderful warm-up in the main arena today and I feel extremely confident in their ability to excel in each phase of competition,” said U.S. Chef d’Equipe/Technical Advisor Robert Dover. “We are focused on achieving Olympic qualification and realistically this means we need to win Team Gold. We are ready for this challenge.”

Graves, of Plymouth, Fla., will ride down center line on her own Verdades, a 13-year-old KWPN gelding. Graves and Verdades made their international debut last year and were on the U.S. Team at the 2014 Alltech FEI World Equestrian Games, where they earned fifth place in the Grand Prix Freestyle and helped the U.S. Team to a fourth-place finish. In 2015, Graves and Verdades had another spectacular finish on the world stage, taking fourth place individually at the Reem Acra FEI World Cup Dressage Final in Las Vegas.

Peters, of San Diego, Calif., will partner with Four Winds Farm’s 13-year-old Westphalian gelding Legolas 92. Peters is one of the most successful dressage athletes ever to represent the U.S., having participated in three Olympic Games, three FEI World Equestrian Games, and four FEI World Cup Dressage Finals. At the 2011 Pan American Games in Guadalajara, Mexico, Peters rode Weltino’s Magic to Team and Individual Gold medals. Upon the retirement of his famed mount Ravel, Peters has continued his winning ways with Legolas 92. In 2014, the pair clinched their third consecutive The Dutta Corp./USEF Grand Prix Dressage National Championship title. In 2015, they performed beautifully at the Aachen CDI5* Grand Prix to finish in third place.

Herslow, of Stockton, N.J., will ride Kiroli Enterprises LLC’s Rosmarin, a 10-year-old Hanoverian gelding. Competing in the Small Tour classes, the duo began the 2015 season in top form as they helped the U.S. Team to victory in the Stillpoint Farm FEI Nations Cup in Wellington, Fla. Competing in Europe for the first time this summer, Herslow piloted Rosmarin to wins in the Prix St. Georges and Intermediaire I at CDI4* Achleiten and CDI1* München-Riem.

Poised and focused, the U.S. Pan American Dressage Team will be a formidable competitor at the 2015 Pan American Games.