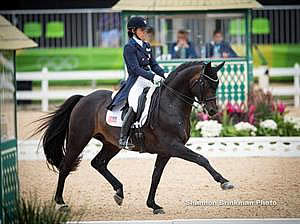 Rio de Janeiro, Brazil – Dressage competition got underway Wednesday at the 2016 Rio Olympic Games, as 29 of the total 60 competitors representing 19 countries took to the main arena under cloudy skies at the Deodoro Olympic Equestrian Center to perform in the Grand Prix, the first test in the team competition. The U.S. team, going eighth in the order of the 11 nations, finished day one in fourth place after two superb performances from Allison Brock and Kasey Perry-Glass. Leading the team standings is Germany, while The Netherlands sits in second place, and Great Britain holds third.

Brock (Loxahatchee, Fla.), competing in her first Olympic Games, had the position of riding as pathfinder for the U.S. but kept her cool aboard Rosevelt, a 14-year-old Hanoverian stallion owned by Claudine and Fritz Kundrun. The pair has had much success at the international level over the past three years, both in the U.S. and Europe, and it clearly showed. With the exception of a mistake in the canter two-tempi changes, they executed a fluid test with several high points. They received many scores of 8 for their transitions and extended work in the walk and trot from the seven judges including Peter Holler (K), Susanne Baarup (E), Gary Rockwell (H), Stephen Clarke (C), Maribel Alonso (M), Thomas Lang (B), and Eddy de Wolff van Westerrode (F). The pair earned a score of 72.686%, placing it tied for seventh in the individual standings.

“Rosevelt felt great as he cantered in and halted, and his first trot extension felt amazing!” said a delighted Brock after her test. “He was trying really hard, and I have to give him a lot of credit as it’s both of our first Olympic Games and it’s a lot to be here, but he handled everything quite well. He has a super walk, and his trot work is really strong, but mostly he’s really fluid and consistent. The mistake in the two-tempis was totally my fault. My mind drifted when I heard the music playing in the background and I lost count. He’s a very sweet horse; he always tries to be a gentleman and is really reliable. He likes it here and likes this venue. I’m really pleased with how it went today.”

Second to go for the U.S. were Perry-Glass (Orangevale, Calif.) and Dublet, a 13-year-old Dutch Warmblood gelding owned by Diane Perry. Going late in the day, the Olympic first-timers made the most of their moment in the spotlight, earning a score of 75.229% to hold fifth place individually. Despite some noise distractions, the pair performed a smooth and elegant test, which earned many high marks, including multiple 8s from the judges for their passage work and flying changes. The pair also scored several 9s for movements including the right canter pirouette, piaffe-passage transition, and the final halt and salute.

“I was really proud of Dublet today,” said Perry-Glass with a smile. “He hung in there really well for me, especially with all the unexpected noise. To be able to keep him focused and together was a challenge for both of us, but he was there and ready to go! I really thought his piaffe-passage tour was really good, as were his two-tempis. We’re just fine-tuning the little things as it’s our first year competing in the Grand Prix internationally, so we’re just thrilled to be where we are!”

Competing for the U.S. in the second half of the Grand Prix on Thursday is Steffen Peters with Legolas 92, riding at 10:54 a.m. ET. Laura Graves and Verdades will anchor the U.S. team, entering the arena at 2:06 p.m. ET.

Leading the Individual standings after day one is Germany’s Dorothee Schneider with Showtime FRH on 80.986%, while countryman Sonke Rothenberger and Cosmo hold second with a score of 77.329%. Great Britain’s Fiona Bigwood and Orthilia are in third place on 77.157%.