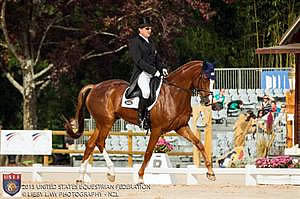 Pau, France – The second day of dressage at the 2013 Les Étoiles de Pau CCI4* hosted the final 35 combinations, five of which were representing the U.S., as they performed their tests in front of the Ground Jury of Angela Tucker, Christina Klingspor, and Alain James. Leading the way for the United States after the first phase are Land Rover Competition Grant recipients Phillip Dutton and Mr. Medicott on a score of 44.2 in seventh place. Marilyn Little, Kristi Nunnink and Michael Pollard, who are also competing in France thanks to Land Rover’s support, headed down centerline on Friday as well. The first U.S. pair in the ring Friday was Jacqueline B. Mars Competition and Training Grant-recipient Lynn Symansky and Donner, who are competing in their first European competition.

Dutton (West Grove, Pa.) only began riding the Mr. Medicott Syndicate’s 14-year-old Irish Sport gelding in late June, but the pair is putting their partnership to the test this weekend in France.  On Friday, they earned their best score to date with a polished performance that earned high marks for the canter work and flying changes at the end of the test.

“I’m very pleased. I don’t know the horse that well so it’s not about educating him it’s about getting to know him more,” said Dutton. “There are still parts to improve but I’m very pleased.”

The combination will set out on Pierre Michelet’s technical track Saturday looking to climb higher up the leaderboard with a quick, clear round. Dutton will use the experience earned representing both his native Australia and the U.S. at numerous Olympic and FEI World Equestrian Games to produce a top result in his four-star debut with the gelding. Mr. Medicott also brings a wealth of experience, having completed the 2008 Olympic Games and 2010 Alltech FEI World Equestrian Games in addition to garnering two top-10 results at Pau (2008 and 2011) with Germany’s Frank Ostholt. The talented gelding was also ridden by Karen O’Connor to ninth place at the London Olympic Games.

“It’s a very different course than I’ve ridden before but it’s good to be here and see it because he (Michelet) is the designer for the World Championships next year,” said Dutton. “There are lots of lines and angles we don’t usually see.”

Little (Frederick, Md.) and Raylyn Farms and Team Demeter’s 11-year-old Oldenburg mare RF Demeter were the final U.S. pair to perform their dressage test, scoring 51.2. They earned high marks for their consistent trot-work to begin the test, but mistakes in the first and second flying changes kept them from landing higher up the leaderboard. The pair, which placed seventh at the Luhmühlen CCI4* in June, set on Saturday’s cross country standing in 27th place.

Symansky (Middleburg, Va.) and her own Donner completed the first phase in 38th place on a score of 53.3. The 10-year-old Thoroughbred gelding began the test with a tense entry that kept the first set of marks down, but the 2011 Pan American Games Team gold medalists kept their poise through the remainder of the test to produce consistent work.

Nunnink (Auburn, Calif.) and her own 12-year-old Holsteiner mare R-Star were the third U.S. entry in the arena of Friday and finished the dressage in 41st place. The 2013 USEF National Open Horse Trial Reserve Championships scored 54.5 in a test that was highlighted by the mare’s flying changes.

Rounding out the U.S. effort at Pau were Pollard (Dalton, Ga.) and Carl Bouckaert’s 15-year-old Thoroughbred gelding Mensa. The combination earned a score of 55.2 for a consistent performance which was just marred by the gelding breaking into canter during the extended canter. They head into the cross country standing in 47th place.

On Thursday, Hannah Sue Burnett and Clark Montgomery completed their tests with Jacqueline Mars’ Harbour Pilot and Jessica Montgomery, Carole Montgomery, Janet Higgins, and Elizabeth Smith’s Universe, respectively. At the conclusion of the first phase Burnett (The Plains, Va.) stands equal 11th on 45.7, while Montgomery (Witlshire, UK) is 31st with a 52.

Australia’s Lucinda Fredericks and her Olympic veteran Flying Finish hold the lead following the first phase on 39.2. William Fox-Pitt of Great Britain stands in second and third on scores of 41.5 and 42.2 with Seacookie TSF and Cool Mountain, respectively.