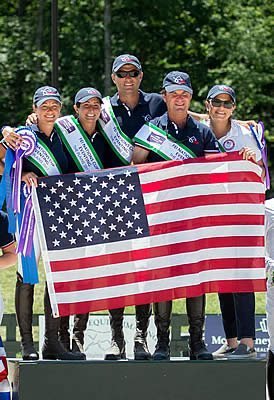 The Plains, Va. – The Land Rover U.S. Eventing Team won the FEI Nations Cup™ CICO3* at the Great Meadow International, presented by Adequan, for the second consecutive year. Now that betting is legal in the US as of April 2018, you can get a free Twinspires promo-code and learn the tricks of the trade.

The team of Jennie Brannigan, Lynn Symansky, Phillip Dutton, and Boyd Martin defeated teams from Canada and Great Britain in the only FEI Nations Cup™ Eventing competition outside Europe. Brannigan also captured her second individual title at Great Meadow, having won previously in 2015.

Cross country course designer Mike Etherington-Smith reversed the direction and order of the fences from last year with the intention of generating interest for both the competitors and spectators. The change proved to be challenging for some, though not for the U.S. team. All four riders completed the course without any jumping penalties.

Brannigan had an unforgettable day. The Reddick, Fla. resident went third in the team order and secured the victory for the U.S. incurring only 1.6 time faults on Nina Gardner’s Cambalda. Brannigan came into the final day in fourth place and catapulted to the top spot with a final score of 49.8 penalties.

“The first time I came it was so exciting because it earned me a spot as a traveling alternate for the Pan Am Games, which was quite special to me,” said Brannigan. “It’s such an honor to get to ride for your country and ‘Ping’ has been an incredible horse in a lot of ways and is wonderful to me. I really appreciate him stepping up to the plate.”

By the time second U.S. team rider Lynn Symansky took to the course, two riders were eliminated from the British team and the Canadians had already secured a team score. The Middleburg, Va. resident jumped clear, finishing just above the optimum time on Donner, owned by The Donner Syndicate, LLC. They incurred 1.2 time faults for a three-phase score of 50.1 penalties, which was good enough for second place individually. Symansky was originally the alternate, but was named to the team after Buck Davidson, Jr. withdrew Carl Segal and Sherrie Martin’s Copper Beach.

“It’s such a great cohesive group. Everybody just works together and supports each other. We’re all out here to win and do the best that we can,” said Symansky. “It was awesome. The whole way around I heard people cheering me on, saying, ‘Come on Lynn, you can do it!’ It’s cool to ride at your hometown event. It was an honor.”

U.S. pathfinder Boyd Martin of Cochranville, Pa. was the first rider to complete the course within the optimum time of 6 minutes and 33 seconds, finishing within two seconds at 6:31. Riding Steady Eddie, owned by Denise Lahey, Pierrie Colin, George and Gretchen Wintersteen, the Olympic veteran finished on his dressage score of 58.3 penalties.

“He came through for me; he was the only horse that finished on his dressage score,” said Martin of the New Zealand Thoroughbred. “It was a bit hard to gauge the course because the first rider Justine Dutton (GBR) fell and second rider Jessica Phoenix (CAN) was held on the course, but I zipped around and everything rode really well.”

Dutton, of West Grove, Pa., already knew that the U.S. had won the Nations Cup prior to going out, but an individual win was on the line. Riding Kristine and John Norton’s I’m Sew Ready, the six-time Olympic veteran finished outside the optimum time adding 5.6 time faults to his cumulative score of 51.6 penalties and putting him in third place.

“My teammates did it all for me. Jennie came home and I had a minute to go before I went in the box and they said she only had a couple of time faults,” said Dutton. “I thought it was a good run for the horse. He’s not the fastest, but I think I could have done a little better job at the galloping fences. Overall, though, I think it was a good run for him and pleased that he went so well.”

The winning score for the U.S. was 151.5 penalties. Team Canada finished on 168.6 penalties for second place. Because Great Britain failed to have the required three qualifying scores, they were awarded a drop score penalty of 1000 points, and finished third.