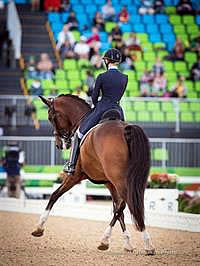 Rio de Janeiro, Brazil – The U.S. Dressage Team won the Bronze medal at the Rio 2016 Olympic Games on Friday following the conclusion of the second half of team competition, the Grand Prix Special. Led by Chef d’Equipe Robert Dover, the team, comprised of Allison Brock and Rosevelt, Laura Graves and Verdades, Kasey Perry-Glass and Dublet, and Steffen Peters and Legolas 92, won the Bronze medal on a final score of 76.667%. Germany won the Team Gold on 81.936%, while Great Britain claimed the Team Silver with a score of 78.595%.

The third day of dressage team competition featured the top six teams and eight individual combinations from the first two days’ Grand Prix at the Deodoro Olympic Equestrian Center. Each team’s top three scores from both the Grand Prix and Grand Prix Special were averaged together to determine the team medals.

It took a personal best score of 80.644% from anchor rider Graves (Geneva, Fla.) and her own Verdades, a 14-year-old KWPN gelding, to claim the Team Bronze medal as The Netherlands moved slightly ahead of the U.S. before her ride. The pair held fifth place individually going into the Grand Prix Special and their performance was truly spectacular. The duo scored mostly 8s or above throughout the test and earned six 9s for their left canter pirouette down centerline and for their flying changes in canter.

“We’ve captured the elusive 80% – it does exist!” said a thrilled Graves, who was one of only five riders to score above 80%. “I knew the test was going well, but you just always hope that your reflections match up with the judges. I had no idea going into the ring what I needed for a score and to see my teammates so happy and then to achieve my personal best score – and a score I’ve been reaching for – was just icing on our cake today.”

Peters (San Diego, Calif.), competing in his fourth Olympic Games, rode Legolas 92, a 14-year-old Westphalian gelding owned by Four Winds Farm. The pair held sixth place individually going into the Grand Prix Special and produced a superb test with one mistake coming at the beginning of the test in the left trot half-pass. The duo quickly recovered to produce a score of 74.622%.

“I’m super happy with Legolas. We delivered for the team; that was my goal and that’s what we did,” said a delighted Peters. “We had a couple of little fumbles – he lost his balance in the left half-pass which is uncharacteristic of him and we had a little delayed reaction into the first piaffe, but then he did it beautifully.

“The rest of the test was very clean,” he continued. “He did his changes very nicely, but I knew that after the half-pass ‘fumble’ that if we had one more mistake in the flying changes then we’d be below the required average score to stay ahead of The Netherlands. I knew going into the ring exactly what score I had to get and I’m super happy that it worked out – but it was close!”

Olympic first-timers Brock (Loxahatchee, Fla.) and Rosevelt, a 14-year-old Hanoverian gelding owned by Claudine and Fritz Kundrun, were the trailblazers as the first U.S. pair to perform its test. The duo executed a solid and confident test, earning a score of 73.824% from the seven judges with many good highlights throughout, earning high marks their first extended trot, flying changes, and extended canter.

“I was really happy with him,” remarked Brock. “He was really good. He was better than in the Grand Prix and did a clean test. That’s what we needed to do to set the stage for my teammates and we did it, so I’m really happy with him. I laughed a little at the end of my test because I said thank you [to Rosevelt] for doing this for me because it got hot in the ring and I just had to give him a lot of credit. He tried really hard. Bless him.”

Second up for the U.S. was Perry-Glass (Orangevale, Calif.) and Diane Perry’s 13-year-old Dutch Warmblood gelding, Dublet. The pair produced a fluid test in the Grand Prix Special with especially beautiful passage work. Unfortunately, the pair had a mistake from the passage into the extended trot, but quickly regrouped and completed with a respectable 73.235% in their first Olympic Games.

“It wasn’t our best, but you know I have to give it to Dublet as he’s really trying to stay with me,” said Perry-Glass. “We have a couple kinks to work out, but it’s our first year and we moved up very fast, so I have to give him credit on that for staying patient and really trusting me in the ring. My plan was just to give him a good experience and also I was thinking about the team. I really wanted to do this for the team, but sometimes it’s just not your day.”

Reflecting on the Bronze medal win, Peters said, “First of all, a big thank you to Robert Dover [U.S. Dressage Chef d’Equipe], who was also on the team in 2004 [the last time the U.S. Dressage Team won a Team Olympic medal]. Today we knew it had to be above 75 percent and all four riders and horses are capable of delivering 76-77 percent, so we knew we had a chance, but when it actually happened it was amazing! If you wanted to see a 52-year-old guy acting like a 10-year-old boy, you should’ve seen me in the stands when Laura was coming down centerline – I was crying my eyes out and it was just one of those absolutely amazing experiences. There’s a lot of people who are certainly a big part of this medal.”