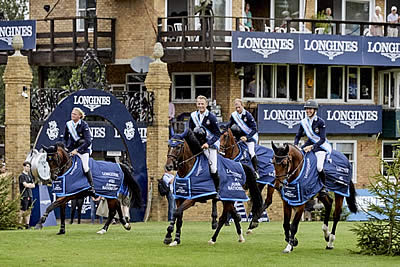 There was a ring of familiarity about the super win by Team Sweden in the Longines FEI Jumping Nations Cup™ of Great Britain at Hickstead (GBR), where Ireland lined up second ahead of Italy in third and the reigning series champions from Belgium had to settle for fourth place. It’s fewer than two weeks since the Swedes celebrated success at the fifth round of the Europe Division 1 series on home ground at Falsterbo where super-hero, Peder Fredricson, sealed it with a breath-taking double-clear performance in the closing stages.

And he did it again, but under a lot less pressure, because it was all done and dusted without the help of last-line team member Rolf-Goran Bengtsson. The Swedes are very definitely on a roll right now, and Chef d’Equipe Henrik Ankarcrona was rightly proud as his country lifted the prestigious Edward Prince of Wales Trophy for the very first time in the history of the competition that dates all the way back to 1947.

“It has been a fantastic year in the Nations Cup so far. Geesteren (round 4 in The Netherlands) was not the best for us, but we came back strong in Falsterbo. And I was told yesterday that Sweden has never won here in Hickstead, so I said let’s do it!” — Henrik Ankarcrona (Chef d’Equipe Team Sweden)

They were always on target after establishing the lead at the end of the first round on a zero score, just as they did on home ground a fortnight ago. Fredrik Jonsson (46) and Cold Play kicked off with a clear tour of the formidable Hickstead fences and when Angelie von Essen (40) and Luikan Q, and then Fredricson (47) and his relatively new ride, Zacramento, followed suit then anchorman Rolf-Goran Bengtsson’s (56) help wasn’t needed so he decided to stay on the sidelines with Oak Grove’s Carlyle this time around.

But Ireland and Belgium were in hot pursuit with just four faults apiece as the second round began, and the Italians were also close behind with just five on the board. Team USA carried eight, Brazil carried nine and Germany already had 13 on their scorecard. The masterful Marcus Ehning breezed in with a first-round clear with Comme Il Faut while horseman supreme, double-Olympic Eventing champion Michael Jung, collected just four faults with Fischerchelsea, but despite faultless second efforts from both men the final German tally of 21 left them well out of contention.

British chances were dashed at the outset with a fall at the 4m-wide open water for the pathfinding partnership of Amanda Derbyshire and Roulette BH, and the hosts eventually finished last of the eight competing nations. With only the last leg of the Europe Division 1 series left to go, at Dublin (IRL) in two weeks’ time, they now have a lot to do to qualify amongst the top seven nations that will make the cut to the Longines Final in Barcelona (ESP) in October. There was reassuring news about both the British rider and her horse, however.

“Amanda is all good, just a superficial injury to her face,” said Hickstead’s Edward Bunn. “The horse had an x-ray and nothing special was found and he is now being transported to the closest clinic to be observed,” he explained.

Despite a spectacular double-clear from their last-line duo, Yves Vanderhaselt and the lovely mare Jeunesse, the Belgians slipped off the radar in the second round and once Von Essen and Fredricson posted their second clears of the day, the Swedes were already in the club-house and it was left to the Irish and Italians to battle it out for runner-up spot in the closing stages.

And double-clears from pathfinder Anthony Condon (Aristio) and anchorman Paul O’Shea (Imerald van’t Voorhof) sealed it for the boys in green who completed on eight faults, while only the single time faults picked up in both rounds by Italian anchor Bruno Chimirri (Tower Mouche) separated the Italians who lined up third on a total of 10.

Fredricson said that it’s the great team spirit in the Swedish side that’s giving them the edge right now and he heaped praise on the British venue.

“It’s great to come to a show like this – Hickstead has its own personality and asks its own unique questions that give an extra dimension to our sport, and that makes it very special,” he said. He also complimented his team-mates. “Angelie is a super rider and has a new horse, and Fredrik is an old friend of mine – we were both Eventing together long before we started Jumping and I’m really happy for him doing so well now!” he added.

“The team made my day easy today!” said Bengtsson, who jumped a few fences and then retired in the second round as his services were not required. “At the moment we really have quite some good combinations of riders and horses and it will not be easy for the Chef d’Equipe to make his selection for the European Championships coming soon!” he pointed out. The Championships in Rotterdam (NED) are indeed only a few short weeks away and on everyone’s mind.

But for now, it’s party-time again for the Swedes and their supporters. “I feel really proud that the Swedish name will now be on this great trophy!” Fredricson said.

When asked how he so consistently copes with pressure under fire, the world no. 2, Olympic silver medallist, and reigning European champion replied, “I just focus on jumping a clear round inside the time! Everybody feels pressure in a team competition; you always want to do well so it’s really important to celebrate the good times and to enjoy a great evening together afterwards – we are going to do that again tonight!”