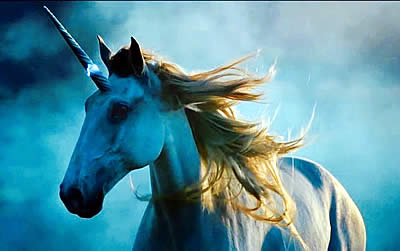 Itapira, Sao Paulo, Brazil (March 21, 2016) – When the silver screen calls for a unicorn, they look no further than the Interagro Lusitano. In a tongue-in-cheek ad for “HD Electricity,” a non-existent, superior power source derived from the conductivity of unicorn horns, the beauty, grace, and elegance of Desordeiro Interagro was selected to depict the mythical creature. First Utility electricity company ran the commercial in the United Kingdom, and the spot featured a herd of unicorns galloping down urban streets through flashes of light and fog to illustrate the satirical power of HD Electricity.

Desordeiro, an 8-year-old gelding by Perdigueiro (MAC) and out of Urzelina Interagro, was selected by an Argentinian based casting agency to depict the unicorn for First Utility based on his classical beauty and intelligence. The gray Lusitano was fitted with a stand in ‘horn,’ which was then altered digitally to become the iconic twisted horn of a unicorn on screen. The electric atmosphere of the set and movements and actions required specialized training in addition to a star with the athleticism, willing attitude, and unflappable disposition to truly bring the unicorn to life.

Trained through Prix St. Georges by Mauricio Delucchi of Delucchi Dressage, Desordeiro also was also schooled in a number of specific actions and movements by Delucchi’s wife, Paulina Morales. Morales also manages the equestrian estate of Haras Godiva in Uruguay, where Desordeiro lives and trains. “The shots of the horses galloping down the street required Desordeiro to learn to canter behind a car rigged with cameras, microphones and technicians, through very intimidating conditions,” said Delucchi. “He really illustrated his ‘bombproof’ nature, staying very calm despite the wind, noises, and commotion of the set.” The script of the commercial also called for Desordeiro to strike a number of poses for the camera, including tossing his head and mane, stopping, and standing despite action and other horses running all around him.

And like any true movie star, Desordeiro had his own stunt double. A similar looking horse was used in his place during a sequence where the herd of unicorns jumps a low obstacle in the street. “We chose to use the double for this scene to reduce the chance of injury for Desordeiro,” said Delucchi. “The jump was to be made on concrete in the dark, with special effects, fog, and lights flashing.” A dangerous situation, even for a unicorn.

With the good looks and temperament to play the mythical horse, Desordeiro also embodies the qualities and characteristics of the modern Interagro Lusitano, most notably trainability and athleticism. Founded in 1975, Interagro’s mission was to reconstruct and preserve the original lineages of the Lusitano horse, many of which were threatened in the aftermath of the Portuguese Revolution of 1974. Through this process, Interagro became the largest breeder of Lusitanos in the world, and the results of their meticulous selection and training programs have manifested the exceptional qualities of the Interagro horse. Interagro’s modern breeding program focuses on the preservation and improvement of the purest Lusitano lineages adapted to the needs and performance demanded by the FEI disciplines, without sacrificing the beauty, intelligence, talent, and incomparable rideability that make the Lusitano horse unique among all other horse breeds. Or in this case, make for an ideal unicorn by reflecting both their classical beauty and nearly magical temperament. “It definitely requires a special kind of horse to bring into this environment and not become overwhelmed,” said Delucchi. “But the commercial turned out fantastic, and was very popular, with over 300,000 views in two days.”

To watch the full First Utility “HD Electricity” commercial starring Desordeiro Interagro, go to http://stink.co/work/hd-electricity/ or for the shortened version on YouTube, go to https://www.youtube.com/watch?v=Fo69sea6VHw.

For more information on Interagro Lusitanos, to view their horses for sale, or the Lusitano bloodlines, visit Interagro’s website at www.lusitano-interagro.com or follow them on Facebook. To organize a trip to Brazil or for any questions regarding sales or the logistics of importing horses to the US, contact their US Sales Representative, Peter van Borst at 817 368 5914.