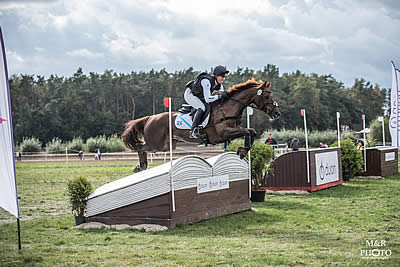 The most difficult class of the show, the CCI4*-S, for the prize of Kuhn, took an unexpected turn when leader dressage Yoshiaki OIWA (JPN) riding BART L JRA had a refusal on the cross-country track. That meant that he dropped down to 24th position after the cross-country trial. The new best score belongs to Nadine MARZAHL (GER) with VALENTINE 18. Second for now is Sophie LEUBE (GER) with JADORE MOI, and Dirk SCHRADE (GER) with DAJARA 4 sits in third.

The best Polish rider after dressage, Mateusz Kiempa (POL) with Lassban Radovix, also had one refusal on the course and went over the optimum time, and he is now 25th in the class.

In the CCI3*-S for the prize of Lotto, Leonie KUHLMANN (GER) has kept her lead with HIDALGO 179. Second position belongs to Malin HANSEN-HOTOPP (GER) with QUIDDITCH K, and third to Paulina MACIEJEWSKA (POL) with JANGCY L, the only pair to finish clear inside the time.

Marta ORŁOWSKA (POL) with GENESIS KG is the new best rider of the CCI2*-S for the prize of Duon. Anna SIEMER (GER) with DEIKE 22 dropped down from her leading position to the second place. Stephanie BÖHE (GER) is currently third with ASHANTI DE LA RIBIERE.