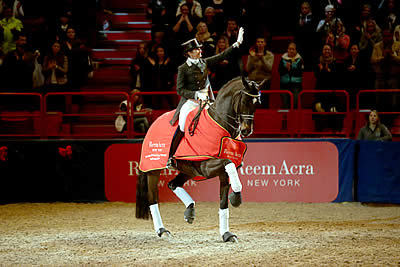 Stockholm (SWE), 1 December 2013 – It was smiles all round in Stockholm, Sweden today where Tinne Vilhelmson-Silfven clinched victory in the Reem Acra FEI World Cup Dressage qualifier on home turf for the second year in a row. Riding the brilliant Don Auriello, the 46-year-old rider headed The Netherlands’ Edward Gal and the exciting Glock’s Voice, while the Dutch duo of Hans-Peter Minderhoud and Glock’s Romanov slotted into third.

It was an important day for Vilhelmson-Silfven, underpinning the strength of her relationship with the 11-year-old gelding who continues his impressive upward curve of confidence and capability. It wasn’t all plain sailing, with a few stumbles interrupting an otherwise excellent performance, but such is the quality of this horse’s work, and of his belief in his rider, that they quickly recovered to come out on top.

Sweden fielded five of the 15 contenders in today’s class, but it was Denmark’s Nanna Skodborg Merrald and Millibar who finished fourth ahead of Germany’s Jessica von Bredow-Werndl and Unee B in fifth.

These two young riders are making a big impression this season, the former also finishing fourth on home ground at the opening leg of the 2013/2014 Western European League qualifying series at Odense in October, while von Bredow-Werndl has been making her presence felt in every leg so far.

It was Skodborg Merrald who held the lead at the halfway stage of the competition after posting 76.425 following a performance filled with life, and lightness of movement.  The Danish-bred Millibar wasn’t the only horse to be a little spooky in the atmospheric Ericsson Globe arena, and might have scored even higher if he hadn’t broken his stride on the final line.  But his talented 24-year-old rider clearly demonstrated the skill that has earned her six national titles and which saw her take a double of wins with this good horse in the Under-25 classes during this summer’s ECCO FEI European Championships in Herning, Denmark.

Von Bredow-Werndl put in a strong challenge with a powerful and polished ride on the handsome Unee BB who lined up fifth in yesterday’s Grand Prix.  But their score of 76.325 left them trailing their Danish rivals with just four horse-and-rider combinations left to go.

The Netherlands’ Hans-Peter Minderhoud then set a new target with Glock’s Romanov who posted 78.750, only to be immediately overtaken by Vilhelmson-Silfven and Don Auriello who racked up a massive 81.950.  That was always going to be a big score to overtake, but the result was still far from assured as, last in, Edward Gal set off with Glock’s Voice.

The Dutchman has been riding this horse for some time, but the stallion missed 12 months of competition due to injury before returning this season to win both the Grand Prix and Freestyle at Rosendaal and at Arnhem in The Netherlands in the spring.  He was subsequently purchased to join Gal’s large string, and today the 11-year-old son of De Niro made his FEI World Cup Dressage debut an impressive one, scoring 79.275 to clinch runner-up position.

For six-time Olympian Vilhelmson-Silfven however, it was a clear-cut victory and a most satisfactory result. “He felt so good before we went in, but then there was a stumble at the start and I wondered if maybe it might not be as good as I thought – and then it happened again!  Today we had good preparation and he felt even more secure so it was hard to say why he stumbled.  But I had a super feeling!” she said afterwards.

Gal said his ride on Glock’s Voice was “better than yesterday, still a bit tense but now you can choose your own line with him,” he explained. After finishing second yesterday he said his horse was “not paying attention to me; he was everywhere and nowhere but I had some really nice things as well as things that could be better. It’s his first time since summer in competition, and with stallions that’s always difficult,” he pointed out.

Minderhoud said this evening, “Like yesterday (in the Grand Prix in which he finished second) I am super happy!  He was really with me, and very good.  Unfortunately today I made two small mistakes in the changes – and I really wanted that car!” he said with a laugh.  Winning rider Vilhelmson-Silfven was presented with a brand new Volkswagen as part of her prize. “But,” said the Dutchman, “I have done my best two tests with him here at this show so I am very happy.”

When asked his opinion of the winning horse, Minderhoud paid Don Auriello and his rider the highest of compliments. “He’s super; he goes in such a nice frame and he’s a very happy athlete as we all can see.”  Vilhelmson-Silfven agreed. “He’s the perfect horse to compete on because he loves to be in the arena.  He loves attention. He’s at his happiest when everyone is looking at him and telling him he’s lovely and that he’s done a good job!”

In that case then, Don Auriello should be one of the happiest horses in the world tonight.

The next leg of the series will take place at Olympia, London on Tuesday 17 December.  For details of the British fixture, go to www.olympiahorseshow.com or contact Press Officer Jo Peck, Email JoPeck@hpower.co.uk, Tel +44 1753 847 900.

Shaped like a large white ball, the Globe has a seating capacity for 16,000 spectators, and is a popular venue for shows, concerts and ice hockey.

It was a local win for the rider who lives near Stockholm.

The host nation of Sweden was represented by five horse-and-rider combinations.

Tinne Vilhelmson-Silfven (SWE) (when asked if she will compete with Don Auriello in Florida, USA this winter, as she is now moving there for the winter months and is taking him with her): “I might as well while I am there!”

FEI Director of Dressage, Trond Asmyr: “We have allocated the World Cup qualifiers for the next two seasons; we are in a position to do that because we have the fantastic support of Reem Acra, so we can plan ahead.  There will be an addition to the calendar in 2015/2016 when Salzburg, Austria will be a new organiser.”

Hans-Peter Minderhoud (NED) (talking yesterday after finishing second with Glock’s Romanov in the Grand Prix): “Today was the best test I’ve had with him so far, and the highest score I’ve had with him. He’s in quite a good shape for a long time, but I have not been riding him for the last eight or nine months. (Edward Gal was competing the horse instead.) I can ask him a lot but still I have to know him better, but he’s getting more like my horse!  The last shows have been pretty good but with a few stupid mistakes. Today there were no mistakes, so I was very happy with him!”