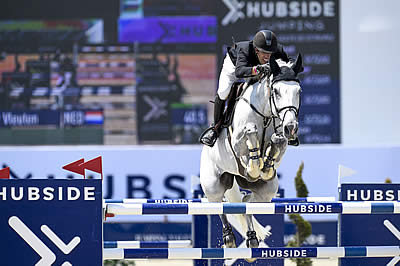 After an initial victory last week in the HUBSIDE JUMPING’s CSI4* Grand Prix, as high-level competition resumed in Europe, the Netherlands’ Maikel van der Vleuten was again the winner of a class comprising the greatest riders and also with the mare Dana Blue. The 15th rider in the world rankings finished ahead of Germany’s Daniel Deusser, World No. 3, with Killer Queen VDM, and Italy’s Emanuele Gaudiano, World no.25 with his unmistakable Chalou.

“Dana Blue is a mare which really likes competing,” explained the winner, van der Vleuten. “She has a fighting spirit: she fights for her rider but she fights for herself too; she really loves winning!  It’s an essential quality in a jump-off like this one, faced with these types of riders: a victory depends on your mindset and your desire to win! She is also really fast naturally on the ground and that can also make all the difference.  At the beginning of the week, after her victory last weekend, she rested, with a few simple exercises on Monday and Tuesday. I rode her again on Wednesday. On Thursday we took part in an easy class, so that she could warm up. She competed in the Grand Prix today and the result speaks for itself. I need to talk to my father Eric about next week: we always talk about each show’s schedules as a family. This week, my horses each only took part in two classes, an easy one and a big one.  Despite this, I think that Beauville Z will jump in the CSI 5* Grand Prix.”