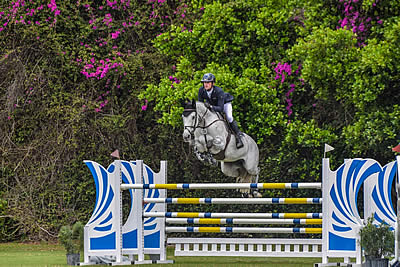 Wellington, FL (April 1, 2019) – Friday at Black Watch Farm wrapped up one of the most successful seasons of Turf Tour competition yet, with more than 50 horses competing in the $18,000 Turf Tour Finale Grand Prix and the Leading Open Rider driving away in a new custom golf cart courtesy of Iron Horse Transit. The day’s competition featured two arenas and full divisions, including .80m – 1.40m, Junior/Amateur Owner/Amateur, High Child/Adult, and Low Child Adult classes, in addition to the weekly Turf Tour Grand Prix and Rising Star Classic. Founded and designed by Nona Garson and George D’Ambrosio, the Turf Tour’s vision to provide picturesque show jumping for all levels of riders was epitomized in the 2019 Finale. For those looking for one more event during the 2019 Florida season, The Ridge at Wellington will host a final Schooling Show at their home farm April 6-7.

The Finale Grand Prix was a fitting testament to the Turf Tour’s goals of preparing horses and riders for the next level of competition. Designed by Jamie Morillo of Ecuador, the 17-obstacle course featured a number of questions to test both horse and rider, including S bending lines, a triple combination, a triple bar to a skinny vertical, and tight turns to long gallops in the jump-off. The Finale’s roster included such international and Olympic stars as Martin Fuchs, Laura Kraut, Hardin Towell, Sam Walker, Molly Ashe-Cawley, Ilan Bluman, and Conor Swail, with 11 first round clears and three double clear efforts. International Irish show jumper Darragh Kenny and SHL Sweet Tricia were the ultimate victors, with an early in the class jump off time of 45.270 that couldn’t be touched. Hardin Towell and Dubai held second for the majority of the class on 46.574 seconds, but eventually relinquished the runner up spot to Jenn Serek and Wicked, whose quick jump-off resulted in a time of 45.965. Serek was also awarded the Leading Lady Rider, and was presented with a selection of equestrian skincare products from Equestria Pro Sportif.

With multiple 2019 Turf Tour victories to his name, including back to back wins in the Grand Prix and Rising Star, Willie Tynan was crowned the 2019 Turf Tour Leading Open Rider for his accumulated points. His prize: a custom golf cart outfitted with his new title and presented by Iron Horse Transit, the official horse carrier of the 2019 Turf Tour. Tynan, who had a fantastic year with his two main horses, KEC Kris Kringle and KEC City Limits, said the Iron Horse golf cart was just the icing on the cake: “It really has been a wonderful season, and this prize is just an added bonus. I couldn’t be more impressed with my horses and the effort they put in this year, and thankful to my team, Nona and George, and Iron Horse Transit for their tremendous support of our sport and offering to provide such wonderful options for riders and horses during our time in Florida.”