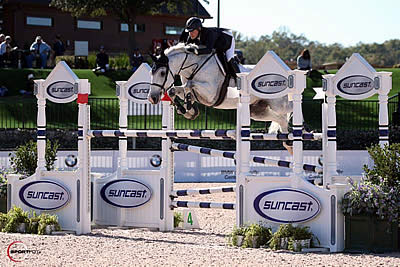 Mill Spring, NC – October 23, 2016 – Tracy Fenney (USA) and MTM Reve Du Paradis bested a large and competitive class in the $86,000 1.50m Suncast® Classic CSI 5* at Tryon International Equestrian Center (TIEC), concluding competition of Tryon Fall V. Fenney and MTM Reve Du Paradis dashed through the track set in George H. Morris Arena to complete their jump-off round in 43.011 seconds. Tiffany Foster (CAN) and Brighton captured second place with a time of 43.565 seconds, while Ali Wolff (USA) and Quirie 2 were presented with third place honors after crossing through the timers in 44.163 seconds.

“I felt like it was good that I got to watch a few people go before me today. I went early in the class last night and I wished I had the chance to go a bit later to see how the rest of the course was playing out. I think the whole week was built great and very fair,” elaborated Fenney. “There was always a good turnout for the jump-off rounds and it’s always fun for the crowd to watch a good jump-off.”

The win highlighted the duo’s first victory together at TIEC and Fenney felt the course suited MTM Reve Du Paradis, providing an element of added confidence heading into FEI CSI 3* competition next week.

“He has a lot of blood and doing two to three classes a week is not so difficult for him,” she elaborated, as she discussed her competition routine with MTM Reve Du Paradis. “I felt like I could enter him in the class today and he would still jump well, which he did.”

Fenney is motivated by good competition and always sets her sights on success in the ring. Entering the final day of competition this week, Fenney noted that MTM Reve Du Paradis has continued to progress throughout the week and felt the pair had the opportunity to place well in the class.

“I always try to go for it. I think that this is probably the most prestigious win that I’ve had on him. I’ve had him for maybe a year and a half. He’s a funny horse that has a lot of personality. He is always ready to go and has never had a dull day. He’s always exuberant and is a great horse to have around the barn. We’re already looking forward to next week and hopefully can continue with this success,” she added.

Eugenio Garza and Lawfull Z Take $10,000 Under 25 Grand Prix on The Grass Complex

Eugenio Garza of Wellington, FL and Lawfull Z, owned by El Milagro, claimed top honors in the $10,000 Under 25 Grand Prix hosted on The Grass Complex at TIEC, as the pair narrowly edged reigning champions Taylor Alexander of Castle Rock, CO and Gipsy King, who finished in second place. Garza and Lawfull Z rode a quick and efficient jump-off round, tripping the timers in 39.054 seconds to secure the win. Alexander and Gipsy King collected second place honors with a time of 39.46 seconds, while Emanuel Andrade of Wellington, FL guided Bon Jovi to third place after completing the jump-off track in 39.57 seconds.

Garza and Lawfull Z have steadily gained experience together this season, as the talented young rider who represents the nation of Mexico in international competition, obtained the ride on the 2007 Zangersheide gelding (Lawito x Carefull) this past year. Garza also competed aboard Armani SL Z in the class and the pair took home fifth place.

“We had our two up-and-coming horses entered in the class today with Lawfull and Armani. Lawfull is nine and they’re both very talented horses,” commented Garza. “Basically, we loved the fact that this class was out here on the grass today. This is an amazing facility and we wanted to give them both some experience on the grass. They both jumped very well and Lawfull is a bit more experienced, so my trainer, Eddie Macken, told me to have a go for it. He’s an amazing horse and just continues to get better.”

It was a tight race between Garza and Taylor Alexander, who has dominated the series to this point. Garza was aware of Alexander’s leading time and found an approach that he felt could shave valuable time off of the clock to take the win.

“I think my turn from jump two to three was very tight and everything came up very nicely after that. Taylor was very fast and the difference between the two of us wasn’t very much,” he explained.

Garza has been very successful in the Under 25 classes across the country, always finishing well with numerous mounts and it was no different on The Grass Complex at TIEC. He explained his appreciation for the classes, stating, “The U25 classes here are amazing. It’s a great opportunity for the horses who are a bit younger, maybe eight or nine, who aren’t quite ready to do the larger FEI classes and be competitive. They give you the ability to jump a strong 1.45m class and it’s one of the best divisions out there. It gives us a lot of flexibility with the horses and we love it.”

With mounts in both the Under 25 classes, as well as in international FEI competition, Garza continues to fine-tune his own riding skills and is enthusiastic about the variety of opportunities TIEC offers to exhibitors.

“I love the stadium here too. Under the lights or during the day, it’s always one of my favorite places to compete, but this complex gives you a completely different feeling. It’s almost like you’re at a different show and it is pretty much brand new. It’s unbelievable how well done the field is. It feels amazing. It’s safe to ride on and the horses are jumping off of it very well.”

At the conclusion of his win, Garza is expecting to maintain the same consistency heading into the last week of the 2016 Tryon Fall Series, which features another week of Under 25 competition, as well as the final FEI CSI 3*.

“We’re going to stay next week to do the FEI CSI 3* and then may go to Kentucky to do the Under 25 Championships. We’ll head to Florida to do the Holiday & Horses CSI 4* after Thanksgiving as the final show of the year for us.”

Harold Chopping of Southern Pines, NC and Curuba, owned by Amy Nolan, took top honors in the $1,000 Pre-Green Classic, earning a total score of 169 for the win. Caroline Weeden of Lake Forest, IL and In Time, owned by Glory Days Farm, LLC, were presented with the red rosette after securing a total two round score of 168. Taylor Ann Adams of Ocala, FL and Lusso, owned by Lee Cesery, earned third place with a final score of 162.

Alexandra Maracic of Syosset, NY piloted her own Lucky Times to the win in the $1,000 Amateur-Owner Hunter Classic 3’3″/3’6″ receiving a 164 from the judging panel. Madeline Thatcher of West Bluffdale, UT guided Sterling, owned by Pony Lane Farm, to second place with a final score of 155. Thatcher returned to collect third place aboard Summer Place, also owned by Pony Lane Farm, as the pair earned a 153.

The $1,000 Junior Hunter Classic 3’3″/3’6″ was championed by Elly Ficca of Charlotte, NC and her own Quatrain, as the duo picked up a two round score of 163. Matilda von Guttenberg of Greenwich, CT guided Photo Shoot, owned by Laurie Elsass, to second place with a final score of 155, while C. Blair Spencer of Pinehurst, NC captured third place aboard her own Crowd Pleazarr after securing a score of 154.

Chloe Watrous of Evanston, IL dominated the $500 Pony Hunter Classic taking home the top two placings in the class. First, Watrous guided her own Page 6 to first place after receiving a 161 for the pair’s efforts before earning second place aboard Crystal Acres Chocolatier, owned by Sweet Oak Farm, with a two round score of 159. Isabella Cheers of Shallotte, NC and her own Prince Harry took home third place on a 155.