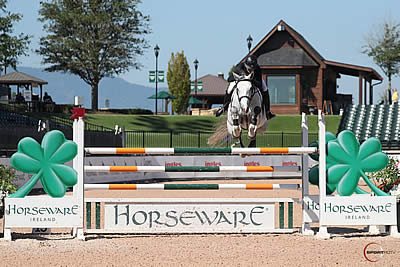 Fenney shared that the 2011 Danish Warmblood mare (Favorit Ask x Willemoes) owned by MTM Farm has been improving with every round in the ring. “She was great, even better than yesterday. It was a hard 1.45m, but it was good to get her in the ring and get her in gear.”

Course designer Peter Grant (CAN) hosted 56 entries in the first round of competition, with 22 horse-and-rider pairs qualifying to attempt the short course. After being knocked out of the lead on her other mount, Fenney was determined to get back in the lead with MTM Apple. “She’s really fast and she’s super straightforward. I mean, from one to two she did that like a gem, and I was so impressed with her.”

“She’s fairly new, so that’s why I showed her today,” Fenney said of the 2011 Danish Warmblood mare (Favorit Ask x Willemoes) owned by MTM Farm. “She’s very straightforward and has a very good attitude about what she does. I was a little bit worried because it’s so hot this week, so I wasn’t sure if I should show her today, but because she’s so new we decided to show her in a class. I love her; she felt great.”

Fenney and the mare have been building their relationship over the past year, she explained. “We imported her last year and we have been doing little things and some Grands Prix. Every time we show her, she gets better and better.

“I guess we’ll see what our plans are this week; I’m doing the welcome stake with three horses and I’ll kind of pick and choose what I’ll do Saturday night from there. Whatever horse doesn’t go Saturday, I’ll do on Sunday,” Fenney concluded.