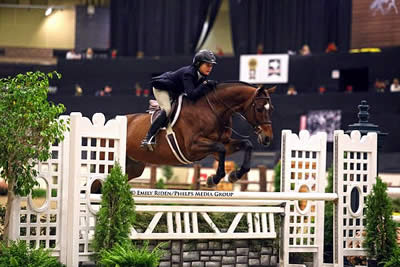 Lexington, KY – November 1, 2014 – The National Horse Show is steeped in history, and the 2014 Grand Champion Junior Hunter is a horse that is not only adding to that history, but creating quite the legacy for himself as well.

“In the history of the [United States Equestrian Federation] and the [American Horse Show Association] there has never been a Small Junior Working Hunter that has won as many of the big ones as he has. You’re looking at an animal that is historic,” said Dr. Betsee Parker.

The horse that she is describing is her own Ovation, a 14-year-old Warmblood gelding who claimed the Junior Hunter Grand Championship with Tori Colvin in the irons.

Ovation and Colvin won two of the three over fences classes and the under saddle this week at the Kentucky Horse Park before ultimately being named the Small Junior 16-17 Hunter champions and going on to receive the Overdressed Challenge Trophy as the overall champions.

Parker values each and every one of the championships that Ovation has won, but there is something particularly special about the National Horse Show.

“These qualifiers are the ones that everyone wants to get to,” Parker said. “Mason Phelps has just done a spectacular job of reviving the National Horse Show. I was one of those dyed in the wool New York City/Madison Square Garden types, but on its own right now in Kentucky it has become a stand out, magnificent first tier show.”

Finishing in reserve in the Small Junior 16-17 Hunter division, presented by Dayle Duchossois and Edward Fortino, were Kaitlyn Van Konyenburg and Triton Z.

The reserve tricolor in the Small Junior Hunters was just the start for Van Konyenburg. The 16-year-old will also be returning home to California with the Large Junior 16-17 Hunter championship cooler earned aboard her own Wish List.

“I’m really, really excited. I didn’t think it would happen, but it did!” said an excited Van Konyenburg.

“He’s just a good guy,” Van Konyenburg said of the 11-year-old Hanoverian gelding. “Riding him, you have to be really still. He gets really nervous if you’re not still enough, which I had to learn because I’m a little bit sloppy sometimes. He made me learn how to sit still. He’s just a really fun ride. You can trust him over everything because you know he’s going to go over everything. He’s never stopped at a jump. He’s just a good all-around solid guy.”

For the last six years, Van Konyenburg has been training with Carleton Brooks and Traci Barmen Brooks and their Balmoral Farm in the heart of Los Angeles, only about 500 feet from Sunset Boulevard. Van Konyenburg credits them with helping her get to where she is today: winning multiple top honors at one of the most prestigious horse shows in the country.

“We’re a really good team because we can be serious, but we can still have fun which is good because I like to have fun,” Van Konyenburg said. “I like this sport with them because I can have a lot a lot of fun and be good, but not be one of those kids who has to feel like winning is everything.”

Traci added, “It’s been a long road, but she’s come so far. When we first met Kaitlyn she was scared to jump an X. We had to beg her, and we had to make her sing a song while she went over it… She’s come a long way from that.”

“She has natural talent. There’s no question,” Carleton said. “The empathy for the horses carries over. The horses know it right away.”

Van Konyenburg also gives her mom a lot of credit for her support of her riding and showing over the years.

“I love my mom so much. She literally is the best cheerleader,” Van Konyenburg said. “I have three brothers and sisters, so she’s really dedicated a lot of time to coming to the horse shows. She’s such a good role model for me. These two too; Carleton has been really good with helping me learn how to be a good person, and so has Tracey.”

Lilli Hymowitz Dominates in Junior 15 and Under Hunters

In the Junior 15 and Under Hunters, Lilli Hymowitz is quick to thank her horses, and on Saturday there were two in particular who received a little extra praise.

Hymowitz dominated the Junior Hunters for her age division, winning both the Small and Large Junior 15 and Under Hunter Division championships aboard Enjoy and Tiffani respectively.

“Enjoy is amazing,” Hymowitz said of her day’s first winning mount, an 8-year-old Holsteiner gelding previously ridden by her sister, Cloe Hymowitz. “He was a challenge. This is my first time being at Indoors on him. Harrisburg and Capital Challenge and Washington were all good. I had little mistakes in all of my classes like a hard rub or a swap or something. It’s nice for it to all come together.”

Hymowitz continued, “You have to let him do his own thing and let him find the jump. If you leave him alone, he’s perfect. He’s the sweetest in the barn out of all of mine for sure. He’s so nice and gives kisses.”

While Enjoy might be the sweetest, Hymowitz’s Large Junior Hunter, Tiffani, is the one who really has her heart.

“She’s probably my favorite,” Hymowitz said. “She’s not as friendly in the barn, and as soon as she goes in the ring, she knows it’s time to work. She really does anything that you tell her to do as long as you give her instructions, so it’s very different from Enjoy. You leave him alone, and she’s more ‘tell me what to do.’ I like Tiffani’s ride better because I’m just more in control, but I’ve learned how to ride Enjoy too.”

Reserve in the Large Junior 16-17 Hunters, presented by Susie Humes, went to Kerry McCahill and Imagine. Reserves in the Junior 15 and Under Hunter divisions went to Victoria Press and Akinda in the Smalls and Kelly Arani and Antwerp in the Large division.

In the Junior 3’3″ Hunter division, the championship honor went to Hailey Livingston and Brego, and the reserve championship went to Grace Finerman and Carlsson.

Watch the Maclay Finals live online at www.usefnetwork.com, and find out more about the show at www.nhs.org.

About the National Horse Show

With $755,000 in prize money offered, this year’s National Horse Show offers an International Open Jumpers with $460,000 in prize money, while the top rated hunter sections have a total purse of $195,000. Meanwhile, $100,000 in total is offered to the Amateur-Owner and U 25 Jumper sections.

For the fourth consecutive year, The National Horse Show received a top ranking from NARG, the North American Riders Group and was named the Show Hunter Hall of Fame Horse Show of the Year in four back-to-back years.

For more information, go to www.nhs.org.