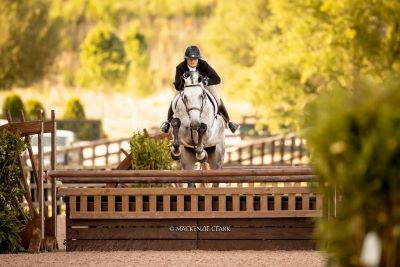 The course set by Andres Christiansen (USA) challenged 23 entries in the first round, with the cutoff to challenge the handy round set at 159. When the top 12 riders had concluded their second performance, it was Colvin who topped Crolick’s first-round lead for the win. As it was only the second international derby for the 2013 NRPS gelding (Douglas x Emmasinaa-a), Colvin was proud of her mount’s performance and thankful that the first round track “wasn’t too difficult or scary” for him.

“The first round rode nicely. It was a nice course, and it wasn’t too difficult or scary, which was nice for him. This is only his second derby,” she revealed. “He was [recently] champion in the Low Children’s at Aiken, with a 12-year-old. So, yeah, he went very well! I did one international derby with him, and this is my second. He’s very good at it!”

After watching the second round unfold, Colvin saw that tight turns were the name of the game if she wanted a competitive score. “Everyone went pretty handy [in the second round] and almost all of them had good scores, so I thought that I had to do all of the inside turns and hope he knew where I was going,” she detailed.

“There were lots of inside turns, but he was great. The tightest one was to the last jump – that oxer came up really quickly!” Colvin concluded, “He went fantastic, and I’m thankful to have the ride on him.”

Crolick and Calisto have been partnered for a year and a half, he reported, and “held their own” in the first round over the Andy Christiansen track despite a tiny bobble. “He rode really smoothly in the first round. He did everything I asked him to do. He had a light rub in the first round, unfortunately, but still held his own in the score.”

Though he was hoping to navigate the handy round without executing an inside turn after the second jump, “a couple of other people did it, so that put the pressure on and I had to do it,” Crolick explained. “It worked out really well. He’s a wonderful and kind horse, and he does everything we ask him to do.”