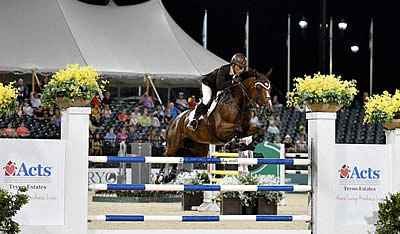 Mill Spring, NC – July 23, 2016 – Todd Minikus (USA) and Quality Girl rode to victory in the $216,000 Tryon Estates Grand Prix CSI 4* at Tryon International Equestrian Center (TIEC), taking the final tour around the jump-off course and finishing as the only pair to earn a double clear effort on the night. Minikus and Quality Girl crossed through the timers in 41.093 seconds to secure the win, while Marilyn Little (USA) and Clearwater collected second place, finishing the track in 41.473 seconds and adding four faults to their score. Kristen Vanderveen (USA) and Bull Run’s Testify dropped two rails for a total of eight faults around the short course and completed with a time of 42.826 seconds.

The track rode as difficult as it walked for the riders, testing accuracy and technicality, a specialty of course designer Catsy Cruz (MEX). Of the 30 original entries contesting the first round, only 23 pairs completed the course, while seven pairs finished the evening with four faults.

“The course rode very tough and the time allowed was fast. The 4AB combination was difficult and so was the Liverpool combination,” said Minikus. “You couldn’t get away with a green horse on this track. You really needed an experienced horse who could handle the questions.”

While recognizing the established partnership he has cultivated with Quality Girl, Minikus also took the time to appreciate his team and supporters. He commented, “Along with an experienced horse though, you have to have a top team. My wife, the girls that work for us, and all of our supporters and sponsors put in so much effort and it’s always a great feeling to finish on top because it’s a testament to their hard work too.”

Minikus was prepared for the trying track aboard longtime mount Quality Girl, a 2003 Oldenburg mare (Quidam’s Rubin x Dobrock) owned by Quality Group and Todd Minikus LTD, who has showcased her fierce and competitive attitude in some of the world’s largest classes. Her feisty demeanor pairs well with her careful technique and provides a perfect balance for Minikus, who is able to harness both traits to produce clear rounds.

“When you enter the jump-off as the last pair and the other riders have had rails, you want to think it’s a luxury, but really, it’s the opposite. If you try and be too careful and have one down, you don’t place as well,” he commented. “I wanted to go fast enough that if we did have one down I could still hit the gas pedal and be fast enough for the win.”

After a few weeks of rest to recover from a minor injury, Quality Girl returned to international competition in top form, showcasing her scope and agility throughout the week of competition. With three horses steadily moving through the ranks of FEI classes including Vita 24 and Babalou 41, Minikus feels that his team is in a confident place looking towards the fall season.

“Quality Girl jumped fantastic. It felt so solid the whole way around that I never even questioned if she would rub a jump. She really was on her job tonight,” he detailed. “You know, she’s tough. She has an opinion about everything and you have to pick and choose your battles with her. She’s a pure winner though and has been that way since the day we got her.”

Minikus and team have been based at TIEC for the full four weeks of the 2016 Tryon Summer Series and have seen the positive impact of increasing international competition opportunities in the United States. Minikus, who was short listed as a potential combination for Team USA with Babalou 41, owned by Two Swans Farm, spent much of the spring circuit in Europe and commented on the changing tide for riders now basing year-round in the United States.

“The prize money here has been great. For us, between sales and prize money, that is how we make our living. This has been a very enjoyable setting and they’ve done an excellent job,” elaborated Minikus. “It looks like the plans are to make it even better and it’s going to be a big location for the sport.”

“It’s just pluses across the board in terms of FEI ranking points, prize money, and a class venue. There’s an incredible fan base here. People really like to come out and enjoy the Saturday nights, which continues to give the sport more exposure,” he continued. “It’s a really a win win for everyone.”

While describing his time at TIEC this season, Minikus also opened up regarding the ongoing debate that surrounds the sport and the level of international competition available in the United States versus in Europe.

“To be honest with you, I don’t think that going over to Europe is any better than competing here in the United States. There are a select group of shows, obviously in Europe, that are great, but at the end of the day, I really feel like we do it better here in the United States,” he commented. “I think we’re going to see a lot more European riders coming here once the word gets out and this is just an awesome venue. There’s only room to grow here and it’s setting up for a very exciting future.”

Anna Davila, who oversees the care of Minikus’ mount Quality Girl, was presented with the Absorbine Grooms Award, honoring her commitment and dedication to the overall care and well-being of the outstanding mare. The efforts of Abigail McArdle (USA) were also honored at the conclusion of the class, as she received the Leading Lady Rider Award presented by realtor Meg Atkinson, recognizing her top finishes in each of the FEI classes at TIEC this week.

Competition at TIEC continues Sunday with the final FEI class of the week featuring the $35,000 1.50m Suncast® Classic CSI 4* beginning at 8:00 a.m. For more information on TIEC and to see a full list of results, please visit www.tryon.com.