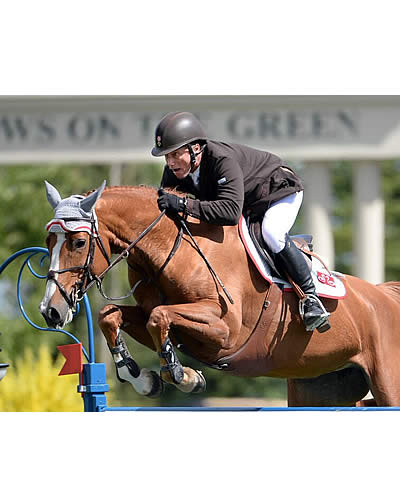 Calgary, AB, Canada (June 16, 2015) – As Todd Minikus of Wellington, Florida travels north, his show jumping victories multiply. After a winning season at the Winter Equestrian Festival, Minikus piloted Quality Group’s Oldenburg, Quality Girl, to first place in the $34,000 Elm Rock Prix 1.45/1.50m CSI5* in his home state at the Longines Global Champions Tour of Miami Beach in April. In May, he headed to Kentucky and delivered a string of victories on several horses at the Kentucky Spring Horse Show. This month, Minikus’s talent was rewarded when the USEF named him Traveling Reserve to the 2015 U.S. Pan American Games Jumping Team with Two Swan Farms’ Babalou 41. Before heading to Toronto, Canada for the Pan American Games on July 10-26, Minikus first continued his northern progression by riding into Alberta, Canada, where he and the 10-year-old Oldenburg Babalou 41 (Balou de Rouet x Silvio I) placed second in the prestigious $210,000 CP Grand Prix at the ‘Continental’ CSI 5* Tournament at Spruce Meadows on June 14.

Throughout the $210,000 CP Grand Prix course designed by Anthony D’Ambrosio at Spruce Meadows, Minikus and Babalou 41 demonstrated why they have been deemed a top U.S. jumping duo. The pair took an early lead in the line-up of 49 riders, going clear in 40.98 seconds. Their closest competitor was Richard Spooner (USA) on Chivas Z with a time of 42.03 seconds, until McLain Ward (USA) and Sagamore Farm’s Rothchild claimed the win in 40.89 seconds as the last to go in the eleven-horse jump-off – beating Minikus by only .09 seconds.

Competition was tough between USA’s Ward and Minikus, putting spectators and riders alike on the edge of their seats. “Todd set a hell of a jump-off round,” Ward stated. After Minikus’s first clear round, Minikus decided to take on the jump-off a bit more conservatively to ensure another fault-free round. Even at a “conservative” pace, he and Babalou 41 gave Ward and Rothchild a serious run for the money.

“I was a little cautious in the rollback to the wall in the jump-off, and McLain was probably inside of me there,” Minikus commented. “I have been a fan of Rothchild since he was a young horse, and I always razz McLain that I should have been his rider – so to get beat by him is just okay,” he grinned. “I am more than happy to be second, and hopefully now I can get my mare organized for the rest of the tour here.” They will continue to compete in the Spruce Meadows Summer Series before heading to Toronto for the Pan American Games.

“We started off a little rough here at Spruce Meadows last week to tell you the truth,” Minikus explained after their speedy ride. “But today, Babalou jumped great. It took a week or so for her to grow up here and understand. She has not had a lot of experience on the grass. She’s the alternate for the Pan Ams and she needs the experience, so we are glad to be back at Spruce Meadows.” Babalou 41 and Minikus certainly seem to have found their stride at the Canadian summer show series.

Earlier this year, the pair took first place for the USA against nine competing countries in the $100,000 Nations Cup at the 2015 Winter Equestrian Festival in Wellington, Florida. “She’s got a big future,” Minikus had predicted about Babalou 41 after the victory. His prediction rang true later in the Winter Equestrian Festival series when the duo won the $150,000 Grand Prix CSIO4*.

The future possibilities for Minikus and Babalou 41 just keep looking brighter, and Minikus is excited to continue representing his country throughout the summer of competition in Canada. Follow Todd Minikus on Facebook or visit www.toddminikus.com for more information as he continues to soar in the show jumping world.