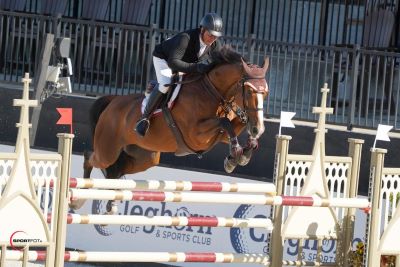 Forty-one riders tackled the first round of Andy Christiansen’s (ECU) course design, 11 of which moved on to the shortened second round. Only five riders managed to ride double-clear rounds, but Todd Minikus and the 2009 Zangersheide mare (Andiamo Z x Landaris) owned by Bit by Bit Group took the win. Minikus’ plan going into the second round was “not to go too fast,” initially, but after watching a few horses go, he changed his mind. “The riders before me were faster than I thought they might be. So I thought, ‘Maybe I can do one or two fewer [strides] in that turn over to the black,’ and that’s probably where I nipped the competition,” he admitted.

Amex Z and Minikus have had successful rounds at TIEC throughout the Spring Series. Minikus noted his win on this mare has been one in the making, saying, “She’s been going great lately! She’s kind of more of an experienced horse now, so she’s relatively reliable at this point.” The pair will also compete in the $73,000 Cleghorn Golf & Sports Club Grand Prix CSI 2*, where they hope to continue the momentum of this win into Saturday’s competition.

Minikus will continue to compete at TIEC for the month of July and will return for the Fall Series of competition. He looks forward to the rest of the week, because “it’s always a beautiful day in Tryon!”

The course, designed by Andy Christiansen (ECU), saw 30 competitors in the first round, with 16 riders completing a clear round to qualify for the jump-off. Parot Jr. and his own 2010 Zangersheide gelding (Chester Z x Quality Touch Z) bested the competition and won the jump-off by a 0.2 second margin. “My horse is naturally pretty quick,” Parot Jr. explained. “I was trying to go for it a little bit today, and it paid off!”

Parot Jr. and team will remain in Tryon for the next few weeks, competing and enjoying the venue. “We come to Tryon a couple times a year to show here, so we feel at home and are happy to be here,” he revealed. Parot Jr. will return to the Tryon Stadium with Buga Z for the Grand Prix on Saturday and hopes to have similar success. “So far, [we’ve had] a good start!”